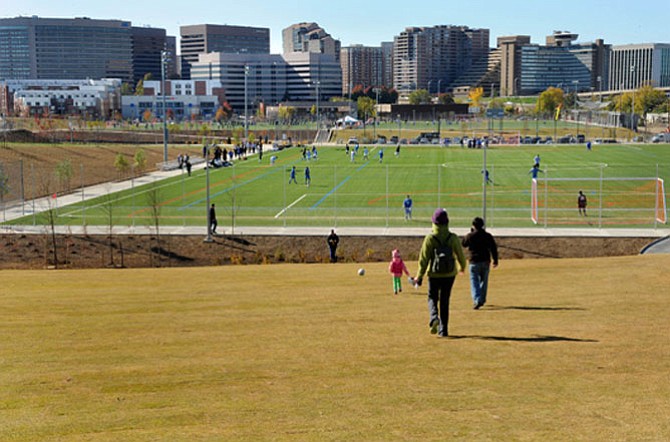 Long Bridge Park in Arlington could be the site of a 50-meter pool, if Alexandria partners with the county. Photo Contributed

Alexandria — Despite Alexandria swiping the TSA headquarters away from Arlington, the relationship remains cordial enough that the two have begun discussions around a shared Aquatic Center. While both sides emphasize that nothing has been agreed upon yet, this fall, Alexandria and Arlington will seek public input on the possibility of partnering to develop a 50-meter pool at Long Bridge Park.

Alexandria and Arlington both recognize the need for an aquatics center. Mark Jinks, Alexandria city manager, said that previous surveys of recreation needs have continually indicated that existing athletic and competitive swimming facilities do not meet the demand. Susan Kalish, director of public Relations for Arlington’s Department of Parks and Recreation, said that a 2004 Citizen Survey found that indoor aquatics facilities were the area of the Parks and Recreation Department citizens were least satisfied with. An updated survey five years ago found similar dissatisfaction with indoor aquatics. In 2013, plans were put forward for the second phase of the Long Bridge Park renovations, but in 2014 those plans were cancelled after the construction bids came in higher than the budget.

Kalish said that the Aquatic Center project has a $79.2 million budget in the Arlington CIP with $59.3 million reserved for hard construction costs. The new total project budget is $64 million with $46 million for hard construction costs; Kalish said $15 million had already been spent on design, environmental programs, project management, and permits. This early in the project, it’s unknown how that cost could be shared with Alexandria.

“We don’t know how that cost is broken up right now,” said Kalish. “We don’t even know if we’re going to partner with them. If the community is interested in partnering, then we’ll look at that.”

Jinks emphasized that nothing has been decided beyond agreeing to have a discussion on the topic. Jinks noted, however, that there was precedent for collaborations.

“We have projects we jointly share over 30 years where working together in a common facility makes sense,” said Jinks. “In some cases, we decide to forgo [partnerships].”

“Some things work and have economies on a regional basis,” said Jinks. “But others, like DASH and Art Bus, work better as individual jurisdictional services. With each service, one of the tools in the toolbox is ‘should we be looking at this regionally?’”