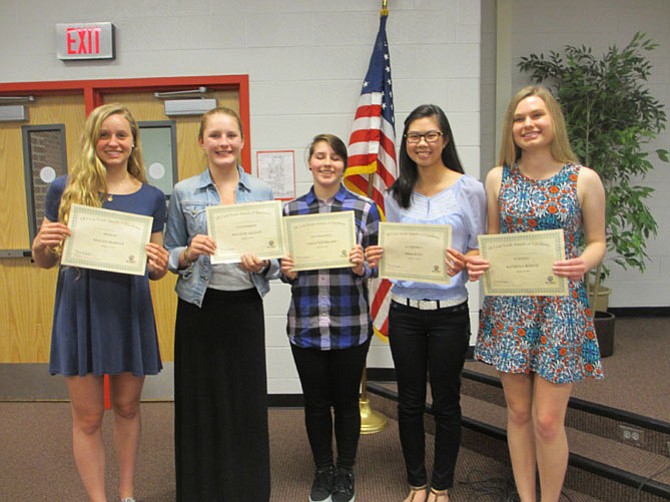 The Optimists’ slogan is, “bringing out the best in kids.” On April 15, the Optimist Club of Greater Vienna recognized outstanding high school juniors from George C. Marshall, James Madison, and Oakton high schools at its newly-renamed TR Cook Awards of Excellence presentation at Madison. Between 12 and 15 juniors were honored in each category: Academics, Citizenship, Fine Arts, Science, Sports, and Technology. Within each category, a candidate was singled out for the Award of Distinction. Amber Liu - Academics, McLean Kelley – Citizenship, Katrina White – Science, Megan Byrnes – Sports, Erica Therkorn – Technology, and Doi Kim – Fine Arts, received the Awards of Distinction. They each received a $125 check. 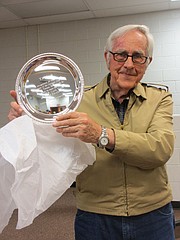 In a surprise presentation, Greater Vienna Optimists president Richard Gongaware, on behalf of the club, honored volunteer club photographer, longtime member, and community supporter TR Cook with an inscribed tray and the official public renaming of the Youth Awards of Excellence to the TR Cook Youth Awards of Excellence. Cook was clearly taken aback by the honor but was quick to credit his service club colleagues with making the program an enduring success. Because Cook was asked to leave his camera off, the official photographer of the club did not photograph his own honor.

Cook founded the Greater Vienna Optimists’ Youth Awards of Excellence 30 years ago. He felt that seniors were typically honored but juniors, not so much. Cook looked at a way to recognize their achievements in school and in the community. Cook started Great Falls Optimists.

Fairfax County School Board Member Ryan McElveen, popular with high schoolers, spoke with humor in-tune with his audience. McElveen’s tweets are famously-followed by Fairfax County students who look to him as one of their own. Born and raised in Fairfax County, McElveen attended Westbriar Elementary School, Kilmer Middle School, and graduated from George C. Marshall High School in 2004, and the University of Virginia in 2008. McElveen helped Gongaware hand out certificates to the students.

Students were nominated by their schools’ guidance counselors or teachers and nominees wrote an essay supporting their candidacy.

Optimists International is the world’s largest service organization, dedicated to the interests of youth in the community. Throughout the year, the Greater Vienna club hosts competitions for school-aged children, from essay competitions for hearing-impaired children to a teen music competition. The local club supports Growing Hope, a Northern Virginia resource for families with children in cancer treatment and the research program in childhood cancer at Johns Hopkins. The annual Christmas tree sale in Vienna is the Greater Vienna Optimists’ biggest fundraiser. Proceeds support the club’s programs, awards, and events.

To learn more about the Optimists and their community programs, or to join, go to