Masterful production to run through May 3 at Tysons. 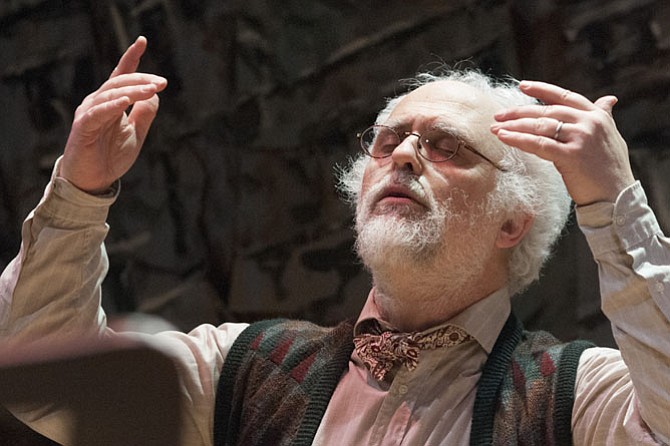 High accolades are due for the 1st Stage production of “Old Wicked Songs,” a play powered by a heart-tugging premise, precise high-caliber acting, with an evocative set and piano music from composer Robert Schumann that opens anyone’s heart to tenderness. And all as two characters are fraught with personal demons and the turmoil of the Holocaust.

“Old Wicked Songs” by Jon Marans was nominated for a Pulitzer Prize in 1996 and has been staged not only in the United States but across Europe. However, it has been rarely produced in the D.C. metropolitan area.

The play is set in Vienna, Austria in the mid-1980s. An American piano student; a rather brash, tense 20-something piano prodigy, Stephen Hoffman (Aaron Bliden well-tuned to resentment) arrives at the music studio of a seemingly over-the-hill, eccentric, music Professor Mashkan (a charming, wise-cracking Philip Hosford). Bliden has hit a creative wall and can’t play in public anymore.

“Old Wicked Songs” explores their relationship; as teacher and student, as two men of different generations, and of two individuals coming to terms with their own personal secrets and connections to the Holocaust and the Dachau Concentration Camp.

Under the assured direction of Michael Chamberlin, the production is full of real passion given off by the two actors. Bliden and Hosford have a felt empathy throughout their entwined characters. There is a mysterious emotional spark that binds them.

With “Old Wicked Songs,” the audience is confronted with the "sadness and joy" and humor of life and music. Through the music direction of Walter “Bobby” McCoy the audience basks in the lush melancholy sounds of Schumann’s music like patrons at a dazzling private piano recital. The music becomes a third very key actor in the show’s proceedings.

The technical design elements start with a gorgeous set devised by Kathryn Kawecki. The audience nearly surrounds the stage, providing intimacy with the close-by actors. The set is wonderfully detailed; one can almost smell the oiled wood of the furniture. The costuming, also by Kawecki, gives the two characters a visual sense of who they are whether a constricting tie for Hoffman, or casual attire for Mashan. Lighting design by Brian Allard and sound design by Kenny Neal add changing sunlight and the sounds of nature, along with trembles from darkness inside the sounds of train box cars.

“Old Wicked Songs” is a fascinating journey for both the characters and audience.