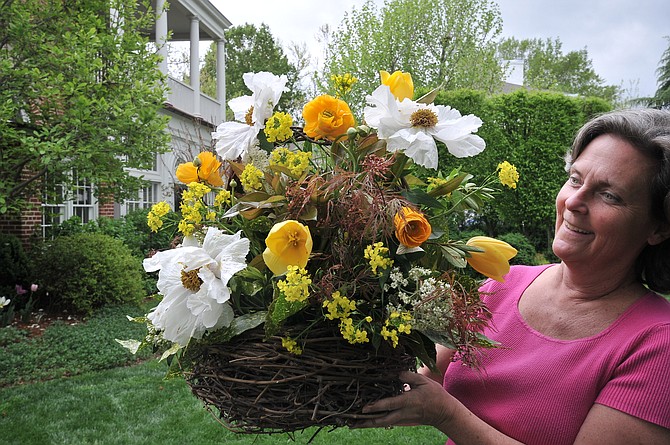 Lucy Goddin displays a finished arrangement to be displayed in a garden. Photo by Louise Krafft. 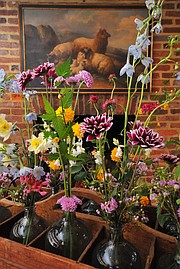 In keeping with the atmosphere of the hearth kitchen, antique bottles are filled with a varied selection of spring and summer blooms.

On April 18th, owners of six of Old Town Alexandria's finest private homes and gardens will open their doors to the public, as part of the 82nd Historic Garden Week, the oldest and largest house and garden tour in the nation. The tour covers the southeast portion of Old Town and includes houses dating as far back as 1786, all within walking distance of each other. The homes will sparkle with beautiful flower arrangements created by the members of the Garden Club of Alexandria and The Hunting Creek Garden Club, which are sponsoring the tour. All benefits go to the restoration of historic gardens and landmarks in Virginia.

Highlights of the houses on the tour include:

Picking up the color scheme of the morning room, a whimsical display of arrangements become a focal point.

Built around 1834, this Federal-style residence is rich with the history of the sail makers, coopers, china merchants and other tradesmen listed in the city’s 1850 census as residents of this block. Much of the original trim and some of the original hardwood floors remain, as does a red oak that was planted soon after the Civil War. One of the house’s current owners is an interior designer.

This lot was purchased around 1790 and the house was originally built as one of the first rental properties in Alexandria. Its garden, which includes a rare 18th century brick arch and octagonal brick chimney, was extensively renovated in 2008 and features a goldfish pond, a swimming pool, and pool house. 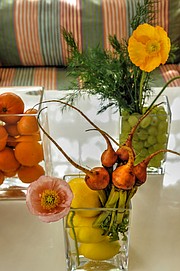 Picking up the color scheme of the morning room, a whimsical display of arrangements become a focal point.

This lot was first purchased in 1774 and the house was built as an investment rental property in 1786. The merchants used the first floor as shops or offices and lived with their families above. The house features original hardwood floors and remodeled bathrooms and kitchen.

Originally built around 1800, this house was extensively renovated in 2006. It has a beautiful vista of the Lee Street Park and Potomac River.

Most of the flowers used in the floral arrangements for the house and garden tour are from the club members gardens.

The nucleus of this restored carriage house was built in 1801-1807 as a horse stable. Remodeled in 1874, the building was owned by a wealthy banker and his wife, a direct descendant of Thomas Jefferson. The original carriage house remains in tact and is used as a den and library. At the front garden gates, a delightful scene unfolds, from ornamental hornbeams along the left wall to a front pergola draped with clematis, as well as sculptures, a pool, and a cobblestone and brick alley.

Built in 1790, this was the home of Robert Fulton while he secured a patent for his steamboat. The brick house still has its original dentil moldings on the exterior, as well as other historic features, including the wide-wood floors, interior moldings, window glass, and the original mechanical doorbell, restored by the current owners. The French dining room doors, installed in 1902, are from the White House, reclaimed after a renovation under President Theodore Roosevelt. The garden’s rear gate exits onto an 18th century cobblestone alley 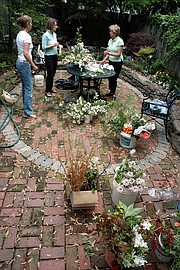 Diane Hynes, Ann McMurray and Anne Hobbs work on arrangements in a back garden.

Complimentary light refreshments will be available at St. Paul’s Episcopal Church (228 South Pitt Street) from 11 a.m. until 3 p.m. on the day of the tour.

The Marketplace at the Athenaeum (201 Prince Street)

About Historic Garden Week in Virginia

Virginia's Garden Week is known as "America's Largest Open House." Historic Garden Week tours throughout Virginia have been held annually since 1929, except for a period during World War II, when members of the Garden Club of Virginia (GCV) took time off to tend to their Victory Gardens and help with the war effort. Every year, more than 3,300 members of the GCV work to produce the tours during the last full week of April. Tour proceeds are used to restore the gardens and grounds of Virginia's most historic sites. Since the first statewide tour, over $17 million has been raised.

Caroline Norman designed and created flower arrangements for each place setting in a formal dining room complete with napkin rings.

PARKING:Street parking on residential streets is not recommended. Paid parking lots and garages in Old Town are located at: