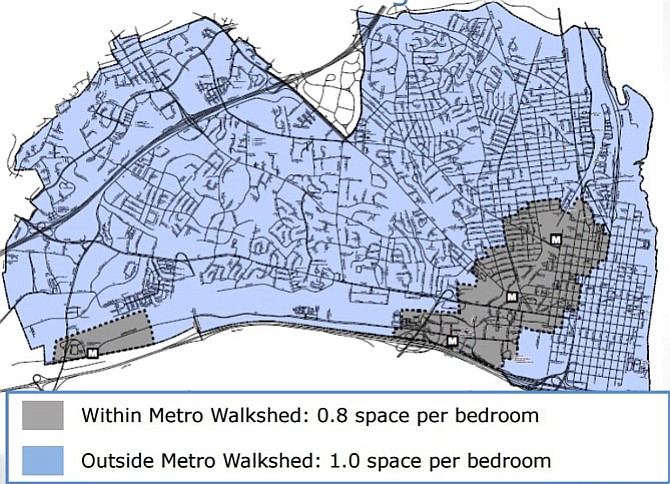 “The issue here would be a developer passing off a two-bedroom unit as one for a parking discount.”

A proposed text amendment to the Alexandria Parking Standards will decrease the amount of parking spaces residential property developers will be required to provide.

The amendment, proposed by the Parking Standards for New Development Study Group at the April 7 Planning Commision meeting, was passed in a 6 to 1 vote and will be considered by City Council at its April 18 meeting. Proponents of the change argued that the new definitions reflect an Alexandria that is more “walkable” and has greater mass transit accessibility. Residents of Old Town say the change only further exacerbates the already dire parking conditions along Alexandria’s Waterfront.

The current policy determines parking requirements by unit rather than bedrooms, although multi-family dwellings are still subcategorized by bedroom units. For example, single residential units and townhouse developments require two spaces per unit, while two bedroom apartments require 1.75 spaces per unit and dwellings with three or more bedrooms require 2.20 spaces.

Stewart Dunn, a member of the Planning Commission, expressed concerns that a developer could build an apartment that technically only had one bedroom but came with several dens or living rooms that could be used, in practice, as bedrooms.

“If we’re counting by bedroom, it’s crucial that we understand what that means,” said Dunn. “That definition is not in this text and that’s a problem. The issue here would be a developer passing off a two-bedroom unit as one for a parking discount.”

Robert Kerns, Development Division Chief for the City of Alexandria, responded that the city uses the statewide building code definition of a bedroom as their parameter. However, there was an awkward moment during the commission meeting when Dunn asked Kerns to read the statewide definition, which was listed as to be determined “by appropriate zoning codes of the local municipality.”

“This is circular,” said Dunn. “We don’t have a definition. There are things we need to take care of here.”

“We’ll have to find a definition,” said Nathan Macek, a member of the Planning Commission and the Parking Standards for New Development Study, “but this is a problem with the existing standards, it doesn’t matter [in terms of] whether we approve this or not.”

Projects located outside of the half-mile radius of a metro could apply for credits that would allow them to reduce the number of required parking spaces. If a project is outside of the half-mile radius from the metro station but within a half mile of a Bus Rapid Transit stop, the project could apply for a 10 percent overall parking reduction. If there are four or more bus routes within a quarter of a mile from the development, or if the project has 20 percent or more studio apartments (a single room apartment), the project can apply for a five percent reduction in its parking requirements.

One of the more controversial credits involves a credit for up to 10 percent based on the project’s “walkability index score.” Walkability of a neighborhood was initially determined using a web application “Walk Score” (walkscore.com) that determines an address’ distance to locations like grocery stores and public amenities. The proposal noted that, while Walk Score was initially used during the development of determining “walkability,” city staff developed an Alexandria-specific index that scores developments based on proximity to neighborhood services, civic and community facilities, and retail.

“I don’t think ‘walkability’ is a solid idea in terms of credits,” said Dunn. “It’s hard to define, it’s very subjective … We’re getting into something very imprecise, and if we downsize parking too far, it’s very difficult to recover from that.

Macek emphasized that the index is still a draft and will likely continue to be refined and re-written.

“This walkability index came up late in the process and perhaps we need to take another look at the index,” said Macek. “I don’t want to see this stripped out, but I think there’s room to drill down on this.”

Beach said that the change is an affirmation of parking trends already seen in current developments in Alexandria. According to the staff report on the amendment, of the 15 residential/mixed-use development projects that have been developed in Alexandria over the last five years, 14 have requested and received parking reduction special use permits.

Later that same evening, the Planning Commission approved an additional special use permit for an existing housing complex near the Braddock Road metro to turn one of its parking lots into a dog park for residents.

The Potomac Club Residence requested approval of an amendment to its Development Special Use Permit to remove a 26-space surface parking lot, which would reduce the parking ratio to 1.10 spaces per housing unit, and shift the parking at the facility exclusively to a 518-space underground parking garage on the site and another eight space surface parking lot. The facility has 479 residential units and 526 parking spaces.

“We should be thrilled that we don’t have to answer that tonight,” said Maria Wasowski, a member of the Planning Commission.

The Potomac Club Residence’s request was accompanied by a letter from Judy Guse-Noritake, president of the Braddock Metro Citizen’s Coalition, that expressed support for the change.

“Since this development was planned and constructed there have been many changes in the way people live, work, and play in this neighborhood,” said Guse-Noritake. “We have learned that less parking is needed this close to the Metro stop and that open space in such a dense area is at a premium … Fewer cars, more open space resources for people and a private dog park for the tenants … this is a win-win all the way around in our view.”

Overall, members of the Planning Commission said that this was an example of the kind of shift in parking trends that merited the text amendment.

“This is the poster child for why we’re pursuing this new policy,” said Macek.

“It’s a pleasure to approve a project like this,” said Mary Lyman, a member of the Planning Commission. “How often do you get to turn a parking lot back into a park?”

The answer would be “frequently” if Jim Kapsis, chair of the Environmental Policy Commission, had his way. Kapsis’ letter to Mayor Bill Euille and members of the City Council was included with the parking text amendment. Kapsis’ expressed support for the amendment as complementary with Alexandria’s Environmental Action Plan’s goals to reduce emissions from daily vehicle usage and to promote “more responsible land use.”

But the public comment portion of the commission meeting revealed that citizens of Alexandria’s Old Town believe the new parking standards will hurt the already dire condition of parking on the waterfront.

“Staff has mentioned an oversupply of parking, but on the waterfront there is no oversupply,” said Jerry McAndrews, an Old Town resident. “This policy may be fine for the rest of the city, but it puts the waterfront in a crunch.”

“The staff recommendations are surprising considering the acute shortage of spaces and with the city proposing new developments and trying to attract more visitors,” said Susan Askew, a local resident. “A plan that reduces parking defies logic. We need to think bigger and think creatively. We need to create incentives to create more parking, not to reduce it. If we don’t address this … people won’t want to come to Alexandria.”

The Old Town Area Parking Study, released in early 2015 and currently under review by the Parking Study Work Group, showed that parking on the waterfront is beginning to show signs of strain. On-street parking in Old Town averages 71 percent capacity during peak hours, which is under the city’s definition of “full,” which ranges from 85 to 90 percent occupancy. Maximum capacity is not 100 percent as, at 85 percent, it becomes nearly impossible for someone casually searching a parking area to find a spot.

Townsend “Van” Van Fleet spoke as president of the Old Town Civic Association in his call to exempt all future waterfront developments from the proposed text amendment.

Sandra Marks, the Deputy Director of Transportation and Environmental Services in the City of Alexandria, said that the city recognized the concerns of the Old Town residents and said that staff had included the Old Town Area Parking Study data in their decision-making process, but that ultimately the amendment is best for the city as a whole. Marks noted that the waterfront was outside of the half-mile radius from a metro and developers would fall under that classification when developing on the waterfront. All currently planned developments, like the facilities at Robinson Terminal North and South, and housing planned as part of the waterfront redevelopment, would still fall under the old parking regulations because they were approved before this amendment was proposed.

“Tonight I heard nothing with regard to objections to these standards from anywhere in Alexandria except Old Town,” said David Brown, a member of the Planning Commission. “Do the standards that everyone thinks are applicable everywhere else need to be different for Old Town?”

The Del Ray Parking Study indicated that the area had a 60 percent occupancy rate, though some streets, like Mount Vernon Avenue from Uhler Avenue to Oxford Avenue, consistently scored above 85 percent occupancy.

The text amendment was approved 6-1, with Dunn opposing. The approval also included a note from Macek that city staff clarify the definition of bedroom.

After the meeting, Peter and Holley Kilcullen, lifelong Alexandrians living in Old Town, expressed frustration at the Planning Commission’s decision.

“This amendment used a basic standard of one person to each bedroom, but how many apartments are inhabited by couples, each of whom may have their own car?” said Peter Kilcullen. “The notion of one person in one apartment bedroom is absurd. And ‘walkability’ doesn’t cover all aspects of why people have cars. People need cars for more than just visiting the grocery store. You use a car for getting out of town or going to the doctor’s office. They really didn’t think this through.”

“This decreases visitor spaces for developments in Old Town,” said Holley Kilcullen. “If you don’t have those in the community, people are going to spill out onto the streets.”

Peter Kilcullen didn’t speak at the April 7 meeting, but said after hearing what staff was proposing tonight, said he was going to sign up to speak at City Council when the amendment goes up for a vote on April 18. The Planning Commission will hold a special meeting on April 9 at 7 p.m. in City Council Chambers to review the Old Town Area Parking study.