Getting Dirty for a Good Cause
Votes

Getting Dirty for a Good Cause 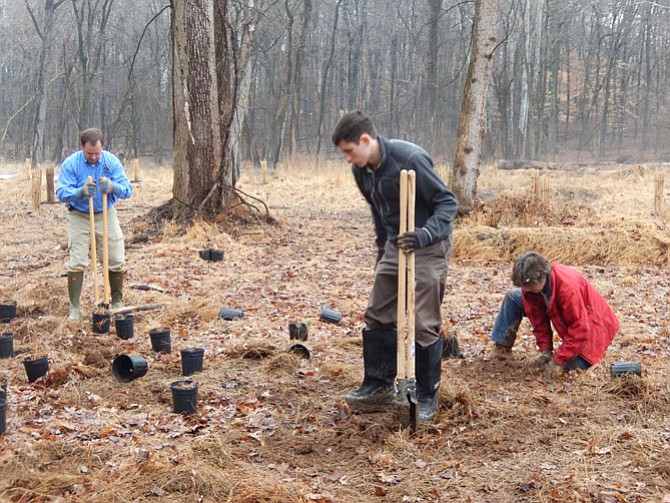 Hard at work planting are (from left) Matt Meyers, Joe Riley-Ryan and Suzy Foster, all with DPWES, Stormwater. Photo by Bonnie Hobbs.

Wearing sturdy boots and wielding shovels and wheelbarrows, some two dozen people recently left their comfortable offices to dig in the soil at Ellanor C. Lawrence Park. When they were done, a variety of native grasses had been planted to beautify the Big Rocky Run stream valley and help stabilize the banks there.

“It’s a community-building event between agencies,” said Charles Smith, the DPWES, Stormwater, project manager. “And it’s a lot of fun.”

Centreville’s Big Rocky Run Stream was restored last year to provide a stable channel. The work also improved the habitat for the animals in the stream — mainly insect larvae which provide food for fish — and the plants and animals outside it.

“As part of that project, we planted seeding grasses, wildflowers, trees and shrubs,” said Smith. “But we compete with an invasive species — Japanese stilt grass — that E.C. Lawrence has been battling for 20 years; it’s pervasive and widespread. The deer eat all the native plants and the stilt grass forms a mat preventing these plants from growing back.”

So on March 11, the staff members and volunteers put in 400 plants — all native grasses — that they believe can compete with the stilt grass. They planted wild rye and sweet wood reed — tough grasses deer don’t like because they contain silica (found in sand and glass) which hurts their teeth.

Noting that the various counties often work together, Smith said Montgomery County propagates local, native grasses from seed. “They produced more last year than they needed, so they gave them to us,” he said. “And it’s a great benefit to Fairfax County to get these free plants; otherwise, they’d cost $2,000.”

Normally, they’d also cost another $4,000 to plant. But, said Smith, “We’re doing this as a team-building project. A lot of these people work at desks, and this gives them the fulfilling experience of getting dirty, putting their hands in the soil and planting something that’ll produce benefits for many years.”

And after all the snow and cold, he added, “It’s great to be outdoors.” The plants were dormant at the time; but when the soil temperature hit 50 degrees, the plants began to germinate and grow.

Laura Grape, NVSWCD executive director, was one of 15 people from her agency doing the planting. “We’re planting grasses found in wetlands areas to emulate what’s naturally found in Big Rocky Run,” she said. “This restoration is really remarkable; and it’s large scale — all the way [about a half mile] from Route 28 to Braddock Road.” 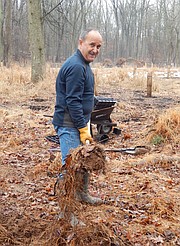 Holding a shovelful of earth is Asad Rouhi, with NVSWCD.

That area’s not always seen by the public, said Grape, “But it’ll make a huge difference in the ecological restoration. I’m pleased that my staff and I are here to help lend a hand.”

Matt Meyers with DPWES, Stormwater, said his division implements watershed-management plans. “A lot of what we do is in-house designs and project management,” he explained. “So when we get to do field work, it’s actually nice to do something firsthand and get your hands dirty.”

“In 2002-03, we originally walked all 805 miles of stream countywide to assess the streams’ erosion and overall health,” he said. “Ecologists sampled and identified the fish and bugs in the streams to help us identify their overall water-quality.”

As stormwater runoff increases, said Meyers, streams get deeper and wider, eroding their banks. That also buries the habitat with sediment, and the sediment nutrients eventually move downstream and can affect the water quality of the Potomac River and Chesapeake Bay.

“So the natural grasses we’re planting filter the water and help clean it before it reaches the stream and continues downstream,” he said. “And they help restore the floodplain here, too.”

Rachel Griesmer-Zakhar, urban forestry division of DPWES, Stormwater, said it was great being outside and “interacting with people I don’t usually see. I’m learning about the plant species we’re planting and why. I like contributing firsthand to the restoration — it’s more rewarding. And it’s nice knowing what other parts of the county are doing.”