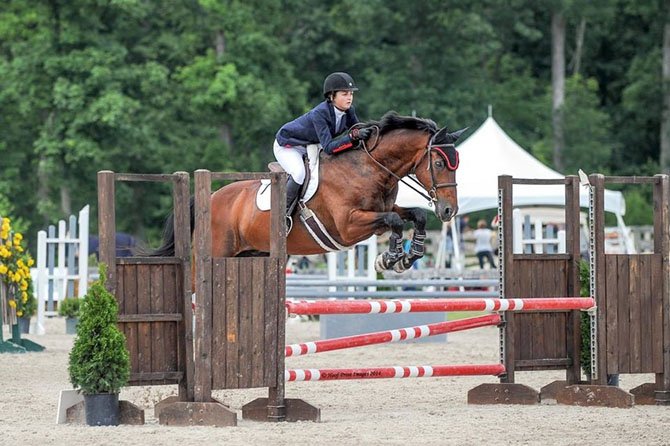 Established in 1958, the Washington International Horse Show is the leading metropolitan indoor horse show in the U.S. This six-day event is held annually in October at Verizon Center in Washington, DC.

In 2009 WIHS introduced its Junior Committee and Youth Ambassador Program, which selects teens to represent the show’s youth perspective and support Washington International Horse Show staff while gaining hands on experience. Applications are due in April. Those who have been selected have the opportunity to be considered for Youth Ambassador by submitting a more extensive application.

All applicants for the Washington International Horse Show Junior Committee and Youth Ambassador must be students between the ages of 14 and 18. Applicants must demonstrate they are well versed in the horse world and be able to articulate when asked questions about the Washington International Horse Show or classes at the horse show. They should demonstrate they are comfortable with special events, the press, TV, radio, print and be active in social media. In addition, applicants for Youth Ambassador should demonstrate leadership experience as he or she will serve as chairman of the WIHS Junior Committee, a group of approximately 20 students.

In the months leading up to the Washington International Horse Show in October, the Junior Committee is encouraged to attend local horse shows, attend meetings and conference calls, and participate in other related activities. During the show, the Junior Committee helps manage Washington International Horse Show youth events such as Kids’ Day and Barn Night, give tours, present ribbons, assist with autograph and book signing sessions, take lunches to judges, escort VIPs to the platforms, help in the souvenir stand, meet with press and do interviews under the direction of the marketing team.

There are also opportunities to view and enjoy the show. During show week, the hours are very long and rather intense, but very exciting. School work and education are a priority for Junior Committee members and Washington International Horse Show is flexible of hours during the week days. 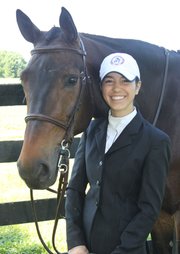 Mary Elizabeth Cordia from Alexandria is the newly named 2014 WIHS youth ambassador. In her role, she will serve as the youth spokesperson for the show and chair the WIHS junior committee, a group of committed students from local public, charter and private schools, who together initiate and work on youth programs and community-focused educational events, such as Barn Night and Kids’ Day. Cordia, an avid equestrian, started riding and showing on a small pony and now competes in equitation and children’s jumper events. When not riding, Cordia is an active volunteer. As student ambassador at St. Stephen’s and St. Agnes School, she represents the school by giving tours to prospective students. She is also an official yearbook photographer, her other passion besides horses. Several years ago, she started a horse show photography business, Clip Clop Click Photography. She currently co-chairs the Virginia Horse Show Association junior committee.

This is Kiki’s first year on the WIHS Junior Committee, however you would never guess it, as her passion for the sport is absolutely contagious. Through her hard work, dedication and insatiable persistence, KiKi earned her own way to riding lessons at age 11. Kiki attributes her success to her parents and the guidance of several mentors at Madeira School. She is incredibly grounded, well spoken and understands the immense privilege of riding and showing. Just recently she spent her summer working at the Arlington Food Assistance Center and was accepted to and attended the Virginia Governor's School for Agriculture. Kiki is a 16-year-old senior at St. Stephen’s and St. Agnes School from Arlington, VA. 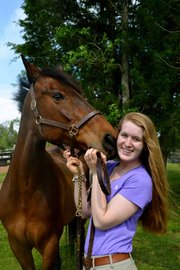 Hanna Powers is from McLean, and is a powerhouse on the Junior Committee, sharing her passion with horse enthusiasts and introducing the sport to new audiences. Through her youth leadership work, Hanna dismantles the preconceived notions that riding is exclusive by organizing and participating in programs that make the farm experience more accessible. In turn, she works to introduce a new generation of youth to the equestrian world, especially in the DC region. Hanna is a 17-year-old senior at The Madeira School, served as the two-time Captain of the Interscholastic Equestrian Association and even made her way onto Capital Hill as an intern for Senator John McCain last year.

Lillian Barber, who goes by “Lily,” is originally from Great Falls, Va., and enjoys her time volunteering at Marion DuPont Scott Equine Medical Center and working as Great Falls Turn Horse Farm as an in-gate keeper. When she’s not spending time at the barn, the 16-year-old-senior at Langley High School also serves as an assistant for her German teacher in which she organizes the annual German Exchange Program at her school.

Miriam Dupree is a16-year-old junior at The Potomac School with roots in riding. Miriam Dupree’s mother is an avid eventer and foxhunter herself. Miriam began riding at the young age of three and began competing at just 10-years-old. She even purchased her first horse, Eros, at 13-years-old. Miriam is ambassador for “JustWorld,” and a leader of The Potomac School’s animal welfare society. She currently boards and trains at the Madeira School in Great Falls, Virginia.

Elizabeth Kruse, a 17-year-old from McLean, Va., was the 2013 Youth Ambassador for WIHS and has been on the Junior Committee for three years. Elizabeth is active with National Honor Society and Relay for Life, and was also a board member for the freshman-mentoring program at Langley High School. Elizabeth has been riding for 12 years, and has competed in Washington D.C., Harrisburg, and Upperville, Virginia.

Caroline McGranahan is a 17-year-old senior at Langley High School and has been on the Junior Committee for two years. She’s originally from Great Falls, Va., and has been riding for eight years. Caroline rides at EverReady Farm and loves competing with her horse, Belle. In her spare time, Caroline volunteers for Lift Me Up! Therapeutic Riding Center and works as a sales associate at The Saddlery in Great Falls.

Rachel Michael has been riding for 10 years and competing for the past seven years. The 15-year-old is a junior at The Madeira School and a member of Madeira’s varsity Interscholastic Equestrian Association team. Rachel also competes with the Virginia Horse Show Association and Battlefield Horse Show Association programs. In her spare time, the Alexandria native enjoys honing her photography skills, especially at the barn.

As a 16-year-old junior at Langley High School, Natalie Ralston rounds out her passion for riding with her love of music. She has played the flute for 10 years and is involved with the Langley Music Band. Additionally, Natalie volunteers with the Langley Chapter of Best Buddies, a club that helps to build lasting friendships between handicapped students and the rest of the student body. This year she’s excited to serve as the president of Langley’s Best Buddies program. Outside of her schoolwork, Natalie is a student assistant of the National League of Junior Cotillion where she spends her time working with youth in practicing etiquette and basic dance steps.

Mollie Thomas is a new member of WIHS Junior Committee and a talented 16-year-old junior at The Madeira School. Mollie has been riding since she was 5 years old and when she’s not competing Molly enjoys swimming.

Jenna Zimmerman, is a 13-year-old rider from Great Falls, Va. and is a new member of the Junior Committee. She attends Kilmer Middle School and is looking forward to this year’s competition with her fellow committee members.

Emily Schlosberg is a 16-year-old, competitive rider from Fairfax Station, Va. When she’s not riding, competing or attending to her schoolwork at Robinson Secondary School, Emily loves traveling with her friends and family. Emily has been a member of the Junior Committee since 2012.

Gaby Ruff is a 17-year-old senior at Thomas Edison High School who began riding at age 12 and swears by her love of macaroons. Gaby is from Alexandria, Virginia, and has been a proud member of the Junior Committee since 2011. This year she’s looking forward to the WIHS competition, and spending time with her fellow committee members.

Jenny Searles is a 15-year-old homeschooler from Gaithersburg, Md. She is a member of the Maryland State 4-H Hippology team and she will travel to Louisville, Kentucky, in November for the Eastern National Horse Roundup. Jenny competes with her knowledge of all things pertaining to horses. She is also a Montgomery County Agricultural Fair princess. As a member of the fair royalty, Jenny took her horse, Samson, to libraries and other venues over the summer to promote the Montgomery County Agriculture Fair. She earned the distinction of being the first person to bring a horse “into” a Montgomery County library. This is Jenny's second year on the Junior Committee.

Olivia McCarren is a 13-year-old from Chevy Chase, Md. She currently attends Westland Middle School and has been on the Junior Committee for three years now. Olivia has been riding for seven years, and absolutely loves to show her pony, Sailor. She currently competes on the Meadowbrook Stables Interscholastic Equestrian Association team and enjoys working with the youth at her barn in teaching them confidence around animals. Additionally, Olivia enjoys working with her mother to collect donations for the KIPP DC Riding Team.

Between balancing schoolwork, riding 15+ hours a week, showing in the Children's Hunters (ages 15-17) and covering the equestrian world with her writing for "Equitrekking," Alexis Mozeleski does it all (and then some). Alexis is a 17-year-old, senior at Washington International School from Washington, DC is currently riding at Rolling Acres Show Stable in Brookeville, MD. Alexis is a seasoned rider (10+ years) and three-year "vet" on the Junior Committee with insight on ALL things WIHS.