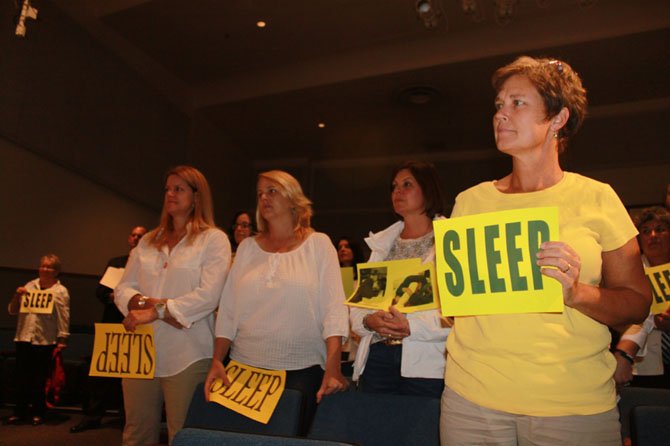 Supporters of later school start times at the Sept. 19 School Board meeting. Photo by Reena Singh.

The School Board is scheduled to approve later start times at the Oct. 23 meeting.

“Sleep began this journey a decade ago,” said Coalition of the Silence founder Tina Hone.

During her time on the School Board, she said, sleep deprivation and talks about starting schools at a later time happened every year. Although the matter affects all students, she said it affects many black and Latino students - the students her coalition represents - the most because they are already disadvantaged by their socioeconomic status and prejudices.

Oakton High School senior Erin Cooper said she and her classmates function regularly on six hours of sleep because they cannot have their homework done by 9 p.m.

“In my school, this daily grind leads to sleeping in the hallway before school begins, sleeping in class, and constant near-missed car accidents in the parking lots,” she said. “There is very little enthusiasm for school activities, dances or football games because we’re too tired.”

Fairfax County Federation of Teachers President Steve Greenburg said he appreciates that the school administration and board cares about its teachers. He talked directly to students and Student Representative Harris LaTeef during parts of his speech.

“Having to change high school start times because of the past incompetence of whoever had the stupid idea to make high school students go to school that early is not going to be easy," he said. "Maybe teachers will be inconvenienced by the change. It might not be very fun for some of them. However, they care most about their students and what is right. Please know Mr. LaTeef and all of these students, your high school teachers are heroes for having dealt with this mess for years.”