100 cyclists and pedestrians killed on the roads in Virginia every year. 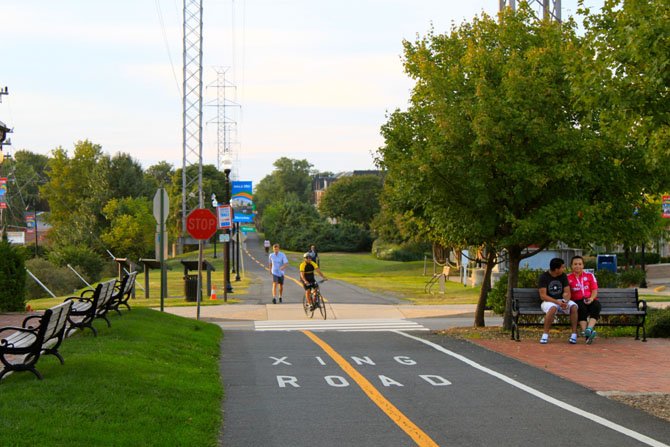 A cyclist and pedestrian cross a street on the Washington and Old Dominion Trail. Photo by Reena Singh.

Herndon is promoting bicycle and pedestrian safety this month.

The Town Council passed a proclamation recognizing Virginia Bicyclist and Pedestrian Awareness Month to make drivers aware of their less protected counterparts on the road.

Council member Steven Mitchell read the proclamation, stating that 100 bicyclists and pedestrians in Virginia are killed annually on the roads.

“To combat these tragic statistics, the Herndon Police Department, Herndon Police Citizens’ Support Team and the town’s Pedestrian and Bicycle Advisory Committee, are teaming up with DRIVE SMART Virginia, Bike Virginia, the Virginia Highway Safety Office at the Division of Motor Vehicles and other like-minded organizations, to make our roads, trails and paths safer,” Mitchell said.

Herndon sees hundreds of bicyclists pass through the town because it is the halfway point on the Washington and Old Dominion Trail. Several parts of the trail have cyclists and pedestrians crossing roads.

“You can never be too safe,” said Mitchell.

Green Lizard Cycling, a coffee and bike shop that sits by the trail, sees people from all over the D.C. metro area who need repairs, water, or just a seat after cycling the trail. Shop Owner Dave Meyer has been cycling competitively for most of his life.

He said motorists need to understand that cyclists have other roadside hazards - such as potholes and glass - in addition to vehicles.

He said cyclists have to be responsible for their own safety as well, on and off the road.

“And on the trail, cyclists need to remember it is a shared resource,” he said.

He applauded Herndon for being supportive to cyclists in the region. Recently, lighting has been added to the trail to keep the path lit at night. Umbrellas, water fountains and benches were installed in the town square for cyclists or families that want a pit stop.

“We’re lucky as a community to have this,” he said.

He said that the Green Lizard’s location is perfect because it’s on the other side of the square. The shop has started serving sandwiches during lunch hours as a way to get more cyclists and pedestrians to stop by.

“Herndon is growing to be a bike town,” he said. “The lighting is awesome. You know that the town cares about the cyclists and their safety on the trail.”

Vides, who lives right outside of Herndon, has been cycling seriously for a year and on the trail patrol for four months. He said he has seen his share of road rage from motorists, especially during evening rush hour.

“You get shouted at,” he said. “You’ll get honked at sometimes.”

Like Meyer, he said it is important for cyclists and pedestrians to be proactive with safety measures. Several incidents where cyclists have been hit by cars happened because one car stopped to let them go in a multiple lane road, he said, but other cars were not aware the cyclist was about to ride across the street.

“You have to be aware of your surroundings,” he said.