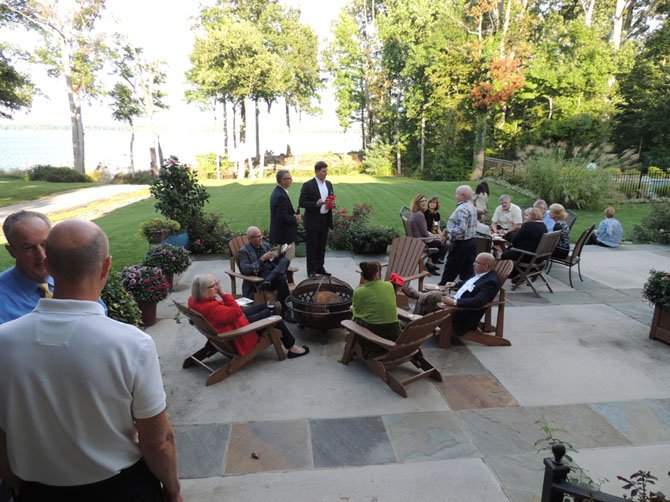 Guests sample wine while raising money for the Lorton Community Action Center at the Raise a Glass of Hope event in Mason Neck. Photo courtesy of Andrea Clay 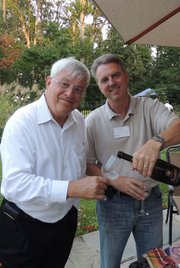 Mo Faber (left) of Springfield and LCAC board member Ron Kowalski (right) of Lorton uncork a sparkling wine at the second annual Raise a Glass of Hope wine-tasting fundraiser.

The event ran from 4-7 p.m. at the Mason Neck home of LCAC board member Bruce Scott and his wife Mary. “The weather cooperated, just barely,” said LCAC Director of Development Andrea Clay. “Clouds parted and we were able to be outside.”

Entry to the tasting was $50 per person, and $75 per couple, some of which was tax-deductible. Guests were able to sample three examples of red, white and sparkling wines from all over the map, including Italy, France and Bulgaria.

Total Wine provided the wine to LCAC at a discount, and LCAC in turn sold the bottles for between $12 and $20. The bottle sales and entrance fees amounted to about $6,000 raised in total, about a 20 percent increase from last year’s event.

The fact that September has been dubbed “Hunger Action Month” by the Feeding America nationwide network of food banks was just a nice coincidence, according to Clay, who said that “unfortunately, hunger is still a real issue in our community.”

LCAC serves about 225 local families per week, every week. By the end of FY 2014, the Lorton volunteers had seen almost a 19 percent increase in the number of households served.

The next LCAC fundraiser will be a 30-minute Halloween-themed “service stroll” at South County High School on Oct. 25, starting at 9 a.m.

To find out more about the LCAC’s different efforts to promote the long-term health of low-income individuals and families, visit their website www.lortonaction.org.