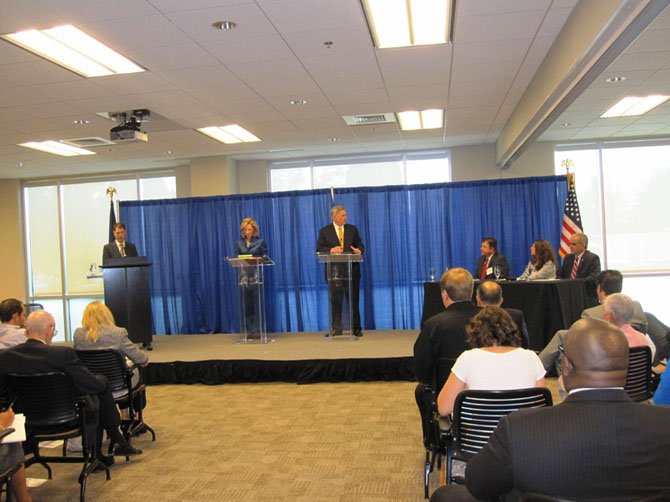 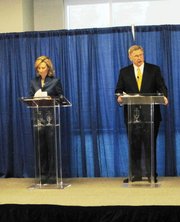 Photo courtesy of the Fairfax Chamber of Commerce

Del. Barbara Comstock (R-34) and Fairfax County Supervisor John Foust (D-Dranesville), who both represent McLean, shared the stage for the first time during a debate-style forum hosted by the Fairfax Chamber of Commerce at Dominion Power in Herndon on Wednesday, Sept. 3.

“You know, I'm often asked why I'm running for Congress … I was born in Johnstown, Pa., born into a working class family. I was the first person in my family to go to college, and the way I was able to do that was by working in the steel mills, working as a laborer on the railroad. When I graduated from college, I wasn't done. I wanted to get an MBA, I wanted to get a law degree, but I couldn't afford to go to school some time, so I worked full time for eight years and went to school at night … I learned the value of hard work, and I learned the value of a good education. I'm running for Congress because I want to create opportunities in this country, so more families have the opportunity to live the American Dream the way I have. Unfortunately, the Congress we have now is broken, dysfunctional. Tea Party Republicans in the House are two parties, and they're not getting the job done. Something has to change. I've served on the Fairfax County Board of Supervisors for seven years. We do things differently in Fairfax County. We do them the right way. I've been a leader who works with both parties, and the business community, and the residents. When I go to Congress, my priorities will be to get past the partisanship and work across the aisle, so we can deal with our fiscal challenges and make Washington work again. We need a functioning Congress. We need to create jobs and opportunities by investing in job creators like education and infrastructure, and research and development."

“Today, the real battles we face aren't about left vs. right. It's really about the past vs. the future. It's the status quo vs. moving forward. What I love about the 10th District is the opportunity to work with an incredibly diverse group of talented people in inventing the future. The people who understand that innovation will restore the American Dream that we've all lived, lift people out of poverty, ease the burden on the middle class, and get us all on the path to prosperity. These are people that work in our businesses, our government agencies, our hospitals, our law enforcement, our schools, our startups, and more. As your congresswoman, I will be focused on your future. I will work to break out of this mess in Washington that creates anxiety, uncertainty, and infighting."

Sharing the stage for the first time since the campaigning began last February, Foust — a Fairfax County supervisor representing the Dranesville District since 2007 — and Comstock — a Virginia House of Delegates member since 2009 and long-time GOP strategist — tried to paint each other as “extremists” during the 80-minute forum before a roomful of business and political leaders.

BOTH CANDIDATES staked out their opposing positions on a range of issues, including education, job creation, transportation, the national deficit, women’s health and the Obama administration.

“Elections are about choices,” Foust said after his opening remarks. “Voters in the 10th Congressional District will have a very clear choice on Nov. 4, between my common-sense, problem-solving record, and my opponent's extreme right wing agenda.”

“Barbara Comstock has been obsessed with taking away a woman’s right to choose …” Foust said. “If she goes to Washington she will continue to pursue a hyper-partisan agenda and we already have too many in Congress who do that.”

“The Obama economy isn't working,” Comstock said. “… I am the candidate in the race who has always made jobs, innovation, and a healthy economy my top priorities.”

Foust countered with his pro-business record on transportation and education.

“Barbara Comstock stood with the most extreme Tea Party Republicans in Richmond and opposed it … You can’t want everything and be unwilling to pay for anything.”

COMSTOCK defended her vote against Virginia’s $6 billion transportation bill, which included $300 million for the Metro’s Silver Line, saying she opposed the transportation funding package because it was tied to Medicaid expansion.

“If you [back] Medicaid expansion, then we have less money for jobs and roads,” she added.

Foust slammed Comstock on her voting record on education.

“On education, I stand with the Northern Virginia business community and support investments in K-12 education. Barbara Comstock stood with the extreme right-wing Republicans in Richmond and voted to slash $620 million dollars from support for public education.”

“My opponent dismisses (my) bipartisan bills, and goes so far as to attack me personally, as not having had a real job or knowing about real jobs,” Comstock shot back, referring to a statement Foust made during a speech in Leesburg on Aug. 20 which inflamed Comstock supporters.

Foust’s campaign later clarified the remark, providing a transcript of the full quote from the candidate’s Aug. 20 speech: “She likes to say she's a job creator … What she fails to recognize, and I think it's because — I don't think she's ever had a real job — she's been, in business or any place else, she's been a partisan operative in Washington for so long.”

Comstock, a Capitol Hill veteran and former top aide to Wolf, dismissed the “insider” prod, saying during Wednesday’s debate that “those who know a thing or two about real jobs have looked at both of us and endorsed me.” She then highlighted her business endorsements, which include the he U.S. Chamber of Commerce, the National Federation of Independent Businesses and the Virginia Realtors Associations.

Foust has earned support from the Human Rights Campaign, the International Association of Firefighters and leading union groups.

While both candidates sparred on many issues, they agreed on one thing: the necessity to work across party lines and break through partisan gridlock in Washington.

Comstock pointed to several bills that she said demonstrated her ability to work across the aisle.

“We passed the first telework bills, the telework bills that now are providing moms and dads with more work-life flexibility, while keeping more cars off the roads. The research and development tax credit we worked on, first passing it, then re-passing it again this year to extend it … The credit that Governor McAuliffe praised as enhancing Virginia's business climate,” Comstock said.

She said she was also the candidate who worked on bipartisan efforts to get offshore drilling in Virginia.

FOUST noted his seven years as chairman of the Fairfax Economic Advisory Commission and on the Fairfax County Board of Supervisors where he helped pass a balanced budget every year.

“As chairman of the board's Audit Committee, I've saved tax payers millions of dollars by cutting waste and inefficiency. And as chairman of the Fairfax County Economic Advisory Commission, I've spent seven years working with dozens of businesses, business and community leaders to make Northern Virginia even more attractive to new and expanding businesses.”

Comstock promised to be focused on the future in Washington. “I will work to break out of this mess.”

“I want other people to have the opportunities that I was so blessed to have,” he said.