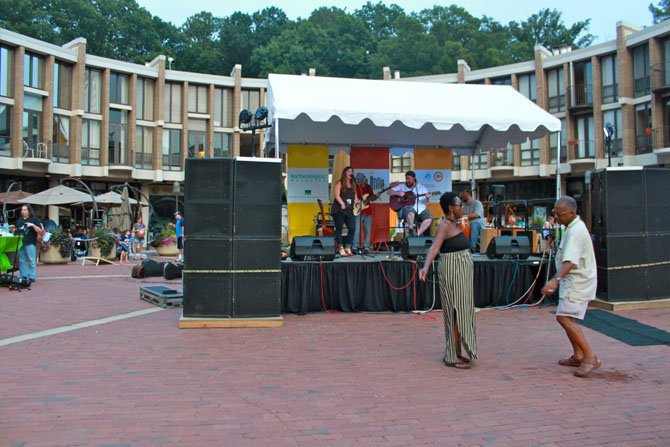 The 8th annual Lake Anne Jazz and Blues festival raked in some of the biggest crowds it’s seen yet on Saturday, Aug. 30, as people came in from all over the D.C. metropolitan region for a taste of the area’s best music.

This is the second year the festival has been held the same weekend as Labor Day. It was previously held in October.

Six bands representing the sounds of blues, funk, R&B and jazz played throughout the day as wine was poured and feet tapped to the beat. Some couples got up to dance to the bands throughout the day. Children splashed in the water fountain behind the stage, interrupting the music with squeals of delight under the blazing sun.

In addition to the music and libations, Initiative for Public Art in Reston brought in two interactive art installations for the event. The “Before I Die” project, which originated in New Orleans, allowed visitors to write down their biggest - or strangest - ambitions on a giant chalkboard in the plaza. The piece will be left in the plaza for about next two weeks.

For locals who have seen Lake Anne’s community change throughout the last 10 years, the attendance made them think that the plaza finally feels like it’s going through a revitalization.

“The bands here are always amazing and it’s nice to be able to come to Lake Anne,” said Reston resident Glenn Walker. “It really feels like it’s becoming revitalized. Just look around. It’s good to be a part of that.”

Reston resident Michelle Creemer felt the same way. She came to the festival with her family to listen to the music and talk to neighbors.

“We’re local to Lake Anne, and we like to come to the events here,” she said. “We’ve been to most, if not all, of the festivals. It’s really grown a lot.”

She said the musician that was playing at the time, Sam Gunderson, played music at her wedding.

“Any time you can come out to Lake Anne, it’s fabulous,” she said.

The festival’s founder, Mykle Lyons, said he was impressed with the size of the crowd, considering that most of the advertisement was word-of-mouth.

“I think it’s a great festival,” he said. “It’s like New Orleans, and we wanted our festival to be that way.”