... as birds multiply in home. 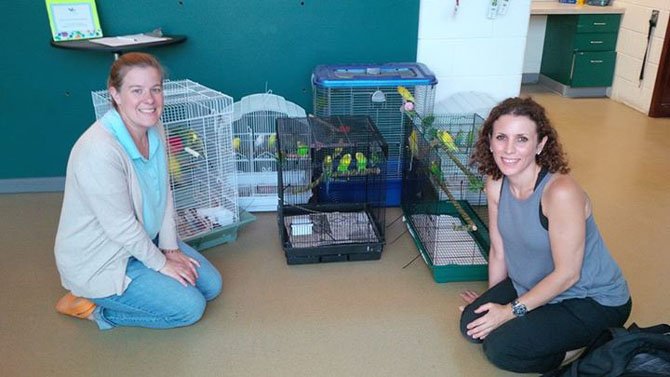 The Animal Welfare League of Alexandria's Director of Animal Care Abbie Hubbard (left) and veterinarian Kim Danoff of Marden's Ark Refuge in North Carolina, with birds captured from a house in Del Ray. Photo by AWLA

All’s quiet now at the bungalow in Alexandria’s Del Ray neighborhood, except for the occasional squawk of an exotic bird called a cockatiel. The bird, a finch called Mrs. Green and an aging rabbit named Bun Bun are all that remain of a menagerie-turned-emergency that existed just a few months earlier.

The home’s owner, Curt, had been a hard-working carpenter — a workaholic, he says — specializing in renovating historic houses in Old Town. But he developed severe pain in his back, and he eventually had to start turning down jobs, the pain defeating his best efforts.

Always an animal lover who’d lived with a series of dogs and cats, Curt didn’t hesitate when a friend asked if he could take on some zebra finches that had been rescued from someone who could no longer take care of them. “I love birds — I’ve always fed wild birds,” Curt said. Soon, he was harboring other rescue birds — parakeets, cockatiels, Society finches, and the newborns of the fast-breeding zebra finches. Headquartered in cages on Curt’s dining room table, the birds — yellow, green, white and smoky-colored — thrived on spinach, lettuce and carrots from Curt’s garden along with their birdseed. The “family” was completed with another rescue — the rabbit Bun Bun, who seemed to tolerate the flock, even as seeds dropped on his head, Curt said.

But as Curt’s back pain grew worse, he found it ever more difficult to keep up with the birds. When he’d let them out of their cages to exercise their wings in the house, he couldn’t get them back in. Soon, they started building nests in exposed rafters in the house’s ceiling and suddenly, it seemed, Curt no longer had a handle on precisely how many birds were sharing his home, or exactly where they all were.

Curt remembers what followed as something of a nightmare — male birds swooping down to get food and deliver it to females nesting somewhere in the rafters; the floors populated with tiny, featherless young learning to walk; fledglings just learning to fly accidentally landing in toilets or falling behind the stove as they attempted to land. At night, mice would take over, feasting on birdseed that coated the floors and climbing onto the table and into the cages.

Finally, a friend alerted the Animal Welfare League of Alexandria (AWLA) to the situation, and three Animal Control officers — Brian Rees, Doug Gudakunst and Alex Cooke — were dispatched. They quickly determined that full protective gear, including, suits with hoods, two layers of gloves and respirators, was needed to enter the house. “The house was really quite a mess, two or three inches deep in birdseed, feces and other debris, birds flying loose everywhere,” said Gudakunst. “But the birds appeared in good shape — mobile, clean and good coloration.”

Curt could only stand by and watch, agonizing. “I was out of my mind over it, until they explained that they would keep the animals at the shelter and I could get some of them back,” he said.

Birds nesting in the home's rafters rather than their cages.

Over a period of three days the officers netted bird after bird, as a veterinarian stood by to check them out; most were deemed in good condition, though three had to be euthanized. In the end, 28 birds and Bun Bun were removed and taken to the Vola Lawson Animal Shelter, which the AWLA operates. Many of the birds were ultimately transferred to a bird sanctuary in North Carolina.

Suspicion that the house might have a gas leak brought the Alexandria Fire Department in, and the marshal then decided to condemn the house until it could be completely cleaned and made safe. An exterminator was called in to cope with the burgeoning mice population. Curt spent seven weeks living elsewhere, occasionally visiting his animals at the shelter with the help of Animal Control Officer Rees.

Despite the trauma he experienced, Curt, the pet rescuer-turned-rescued, has a few fond memories of the ordeal. “It was fun to work with Brian and Doug and Megan,” he sais. “I have nothing but great things to say about the Animal Welfare League — they really saved me.”

Note: If you need help with an animal situation in Alexandria, contact the AWLA at 703-746-4774 or visit www.alexandriaanimals.org. The Vola Lawson Animal Shelter is located at 4101 Eisenhower Ave. in Alexandria.