Not the Victim’s Fault
Votes

Not the Victim’s Fault

Every year, there are around 400 cases of domestic violence in Alexandria where the police can make an arrest. The city’s hotline for reporting domestic abuse or sexual assault receives nearly 2,000 calls. 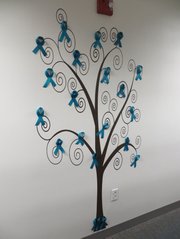 An image of a tree on the wall of the city’s Department of Community and Human Services displays ribbons to honor the victims of domestic violence.

For the month of October, the city has made a special effort to draw attention to the issue. Nationwide, October is Domestic Violence Awareness Month, and in Alexandria this has meant a month of trying to spread information about domestic abuse at farmers markets and metro stops.

“Unfortunately, Alexandria is no different from any other city in the United States,” said Dunn. “Our hotline gets close to 2,000 calls for both our sexual assault and domestic violence line every year. The good news is that Alexandria has a great response to domestic violence.”

Dunn has worked in the DHCS since 1985, and praised the legal advances she’s seen in Alexandria and Virginia since that time. In particular, she noted a law passed in Alexandria in 1988 that allowed police to arrest a perpetrator in domestic abuse cases if there was probably cause, meaning the spouse or child would not have to take the issue to court and file charges.

“Today, 25 years later, we’re all still working together to make sure that victims get the services they need and offenders are held accountable,” said Dunn. With assistance from the police, the department can work to provide treatment for the family and for the offender.

“The law takes [the arrest] out of the hands of the victims, which would normally require the victims to go to magistrate’s office and swear out a warrant.”

But Dunn says there’s still work substantial work that needs to be done to prevent domestic violence. A large part of that battle is now being fought on the cultural mindset about the issue.

“The whole nature of domestic violence is still unfortunately on blaming the victim,” said Dunn. “We see that in sexual and domestic violence. Holding offenders accountable is the job of the criminal justice system. When someone goes in to rob a bank, we never ask the people it happened do what they did to cause this to happen. We need to take responsibility from the crime out of the hands of the victim and to the offender, which is where it should be.”

The DHCS has received vocal support from the community in these efforts. Camille Leverett, chair of the Commission for Women, expressed her office’s support for the work done in the Domestic Violence and Sexual Assault Division.

“[The Domestic Violence and Sexual Assault Division] is an important program to us,” said Leverett, “and we support the work that Ms. Dunn and her team are doing on behalf of the victims of domestic violence in our community.

While the DHCS, like many government departments in Alexandria, has experienced the tighter budget than usual, Dunn says the office compensates with money from state and federal grants.

“[The City Council] has very tough budgetary decisions to make every year, but they continue to be very supportive,” said Dunn. “We also get a lot of grant funding… from the Violence Against Women Act of 1996. This funding comes down to the state and local programs to fund sexual assault centers.”

Dunn noted that of her approximately 15 or 16 person staff, half of those positions were funded by state grant funding.

“[These staffers] are out at farmer’s markets handing out fliers every weekend,” said Dunn. “Every year we also do a hospital day for healthcare professionals. Very often when people are assaulted they go to family physician or emergency room, so we want to make sure that medical professionals in the city are aware of the services, that they respond accordingly and call the hotline or police if necessary.”

“We need to focus on dating violence,” said Garvey. “[We need to look at] what are the patterns being set early on, and having youth feel comfortable with stepping forward and asking ‘this is happening, is this normal?’ Adolescents need to feel comfortable that this is somewhere they can go to talk about this and that it is not a norm to be accepted.”

For Dunn, the most rewarding part of the job is working with survivors of sexual assault and domestic violence. In particular, seeing their resilience, their strength, and their ability to move forward and stand up to their offender by looking for these services.

“You’re not alone, it’s not your fault,” said Dunn, addressing anyone who may be suffering from domestic abuse. “There are a lot of people who can help you. Please contact the hotline at 703-706-4911.”