Toxic plume heads towards nearby neighborhood. 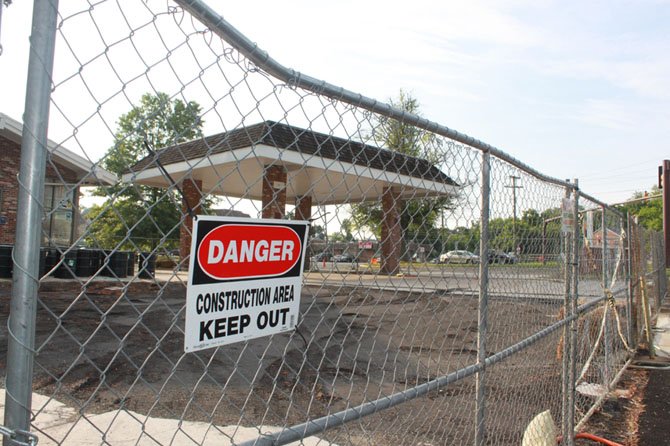 The former Exxon station at the intersection of Georgetown Pike and Walker road is the cause behind a growing Methyl Tert-Butyl Ether plume making its way south. Photo by Reena Singh. 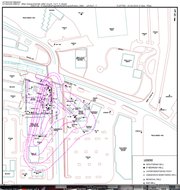 The map tracks the direction the plume is heading in as well as the concentrations of Methyl Tert-Butyl Ether. The plume, once thought only going southeast, has begun migrating south.

The gasoline plume under Walker Road is worse than previously thought — and is moving in the direction of a nearby neighborhood.

About 80 percent of homes in Great Falls are on a private well system. At the moment, the underground gasoline plume is concentrated near the shopping center on Walker Road, but Sojoblem said it was bigger than previously thought after GFCA requested another map to be made.

At the moment, the plume, once concentrated at the former Exxon station site at 9901 Georgetown Pike, has migrated underneath the Crossroads building and Bank of America.

If the plume was to be left alone for a few years, he said, it could contaminate the wells at nearby neighborhood Oliver Estates.

“This testing confirms what we told them 15 months ago,” he said. 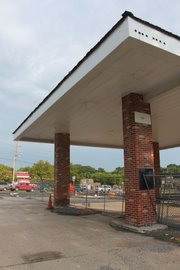 The former Exxon station at the intersection of Georgetown Pike and Walker road is the cause behind a growing Methyl Tert-Butyl Ether plume making its way south.

IN A LETTER to Kleinfelder and Fairfax Petroleum Company, the GFCA asked that they be present at the Nov. 11 Town Hall Meeting at The Grange to answer questions from citizens and let them know whether they will consider the additional pumps.

“As such it is difficult to draw the contamination hundreds of feet underground to the well and processing system on the Exxon site,” states the letter signed by GFCA President Eric Knudsen. “Therefore, we believe it could be advantageous to install pumps at two additional locations, one to the southeast, and one to the south, in the vicinity of the leading edges of the plume in these directions.”

Kleinfelder Program Manager Mark Steele said he plans to attend the GFCA meeting with representatives from the state Department of Environmental Quality.

“I cannot speak to you about this matter,” he said when asked whether he is considering building two more pumps.

The method currently being used for groundwater cleanup to remove MTBE is called Soil Vapor Extraction that sucks the air from the ground to the surface and processes it to get rid of the toxin.

“Because of the amount of time that has gone by, it has been dragged down by groundwater and is percolating underground,” said Sjoblom.

THE ONE PUMP that is being used can pump eight gallons a minute. He said Kleinfelder claimed the cleanup can be done in about three months. As a former environmental engineer, he is a skeptic.

“It’s optimistic that you can deal with this in 82 days when all the times at the past meetings, they said it would take several years,” he said.

“We’re looking for the most robust clean up possible.”

GFCA hopes that alternative cleanup methods that involve adding two more pumps will speed up the process rather than risk residential wells becoming contaminated with a possible carcinogen.

“We’re looking for the most robust clean up possible,” said Phil Pifer.

Pifer said that out of the thousands of spills the state inspects, Great Falls has been one of the few to have state-funded remediation rather than just closing the site.

“They’ve never had a community in Virginia rise up and express concern and get involved like this,” he said.