A Thurber Carnival’ Comes to Town 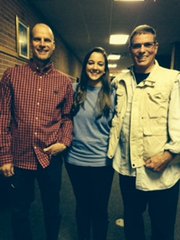 Steven Palkovitz and Bill Doyle of Vienna, and Annie Kehrli of Great Falls, appear in the Vienna Theatre Company’s production of “A Thurber Carnival,” opening at the Vienna Community Center on Oct. 17 and running for three weekends.

With every production, the Vienna Theatre Company stretches its comfort zone. In this fall, 2014, production, VTC draws on a series of scenes based on The New Yorker (mostly) short pieces and cartoons of American humorist James Thurber. The two-act play, “A Thurber Carnival,” offers 15 scenes that embrace light-hearted social situations and the culture of its time, from the mid-1920s to the late 1930s.

“It [the play] is enjoyable and silly, at times, and, as I often say, ‘serious fun,’” said Director Denise Perrino.

Highlights include “If Grant Had Been Drinking at Appomattox,” “The Secret life of Walter Mitty,” and one of the most well-known, “File and Forget.”

The cast of “A Thurber Carnival” includes residents of Vienna, Great Falls and McLean, as well as those from throughout Northern Virginia. They each have multiple roles and among them their favorites.

Bill Doyle of Vienna said his favorite scene, “by far,” is “If Grant Had Been Drinking at Appomattox,” followed by a second-favorite of “Gentlemen Shoppers,” a reference to the bygone days when big stores tried to lure husbands in to shop. In this scene, the gentlemen shoppers imbibe a bit too much. Although Doyle has performed in more than 20 shows over his lifetime, this is his debut with the Vienna Theatre Company.

Vienna’s Steven Palkovitz is also making his VTC debut. Besides his speaking roles, Palkovitz doubles as assistant stage manager. “The Secret Life of Walter Mitty” is the role he enjoys playing the most.

Annie Kehrli of Great Falls rounds out the local cast, and, like Doyle and Palkovitz, is making her VTC debut, as well. She counts “Take Her Up Tenderly” as her favorite role.

“I think it’s special that Thurber lived in Falls Church for a while,” said Kehrli. “That makes this production a bit closer to home.”

Ticket prices for all ages are $14 per person. Tickets are on-sale at the Vienna Community Center front desk when center is open and on performance days. Call 703-255-6360 for information or go to http://www.viennatheatrecompany.com/season/fall-2014-a-thurber-carnival-2/.