GOP candidate Barbara Comstock believes a woman's place is in the House ... of Representatives. 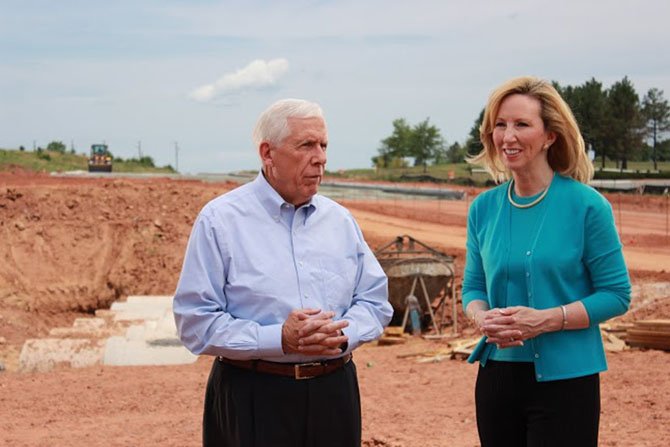 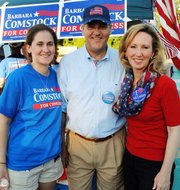 Virginia Del. Barbara Comstock (R-34) grew up in Springfield, Mass. She earned her B.A. in political science from Middlebury College in 1981 and her law degree from Georgetown University Law Center in 1986. She is an attorney and founding partner of Corallo Comstock.

At the beginning of the 2014 legislative session, Comstock served on the following committees:

Personal: She lives in McLean with her husband, Chip. They have three children, Dan Comstock, Peter Comstock and Caity Roller.

Q & A with Barbara Comstock

Q: What are some of your favorite restaurants in your district?

A: "We love The Old Brogue in Great Falls. It's like Cheers, where everybody knows your name. Also The Tavern in Great Falls and J. Gilberts in McLean."

Q: What personal qualities do you have that make you the best candidate for this position?

A: "All of my bosses would tell you this. I work very hard. As a woman in law and politics, sometimes I've had to work twice as hard as my male counterparts. Also, I am a problem-solver. When we were out campaigning, Congressman Wolf would introduce me to voters as a problem-solver, someone who can get things done."

Q: What are you most proud of?

A: "Obviously my three children. They are all doing well, and it's really fun to see your children succeed. Dan is a 2005 graduate of University of Virginia; Peter is a 2007 graduate of Virginia Tech, and Caity graduated from Villanova University in 2010 and George Mason in 2012. Peter is now helping me with my campaign; Caity is a scientist who performs DNA analysis on rape kits. She was married last spring, so she is Caity Roller now, and I'm excited to say she is now expecting her first child and our second grandchild."

Q: What would you tell young women who are considering a career in politics?

A: "Jump in! Believe in yourself, give it your all and 'lean in.' You can make a difference."

Q: What are your top priorities if you become the next 10th district representative in the U.S. House?

Q: What do you consider your major accomplishments as a Virginia legislator?

A: * Virginia’s laws cracking down on Human Trafficking

Q: What is something people might be surprised to learn about you?

A: "My mother was a 'Ted Kennedy Girl.' My family campaigned for Kennedy. We were Democrats."

Q: What is the last book you read? “The Mobile Wave” by MicroStrategy CEO

A: “My Mom. She was and is still a teacher who taught me and my sisters to be lifelong learners, to challenge ourselves with new opportunities, and to always give back and improve our community, while keeping grounded in family and faith.

Q: What do you do to relax? Do you have any particular hobbies, pastimes?

Q: The first five songs on your playlist?

A: Tina Turner, “Simply the Best,” Martina McBride, “This One’s For the Girls,” Aretha Franklin’s “Respect,” anything Frank Sinatra, The Eagles, or Rod Stewart.”

Q: When out-of-town friends visit, where do you like to take them to show off your district?

A: Wolf Trap Center for the Performing Arts.

One in a series of candidates’ profiles.

It’s just weeks before Election Day, and the contest to replace retiring Republican Congressman Frank Wolf in Virginia’s 10th Congressional district has become one of the most watched, most expensive and most contentious races in the country.

But on this crisp fall October morning, Republican candidate Barbara Comstock is in her comfort zone.

She is campaigning door-to-door with Wolf, whom she counts as a longtime friend and mentor, in McLean, her hometown for the past 30 years, which she has represented in the Virginia House of Delegates since 2010.

“I’m feeling great about the race,” said Comstock, her voice a little hoarse from non-stop campaign events. “I thoroughly enjoy meeting people from every walk of life. I’ve been particularly touched by the reaction I get from young women. They notice a woman is out here campaigning.”

Comstock is making a point.

She is aware of the criticism leveled by Democrats who assert that she is part of the GOP's "War on Women," noting Comstock’s vote in favor of the controversial “trans-vaginal ultrasound” bill in the Virginia legislature.

And while Comstock makes no apologies for her strong conservative presence in Richmond, she said she finds it ironic that anyone would label her "anti-woman."

“Really, when I hear that, I think about the fact that I grew up ... surrounded by strong women,” Comstock said. "I think of my grandfather, who had four girls. He was a real feminist. I remember him telling us 'Don’t let any man keep you down. You can do anything if you work hard enough.’ He lived through the Depression, and was a very proud man. He was never able to go to college, but he was the smartest man I knew.”

Comstock said she was inspired to establish a Young Women's Leadership Program in January 2013 after reading Sheryl Sandberg's 2013 book "Lean In: Women, Work, and the Will to Lead.” In the book, Sandberg, the chief operating officer of Facebook, advises women to seek mentors in the workplace and be more assertive with respect to their careers.

AFTER READING THE BOOK, Comstock said, "I wanted to start a program that provides young women, middle and high school girls, to meet and connect with professional women from a variety of sectors."

The program was “incredible and unforgettable” said Danielle Hayden, a junior at Potomac Falls High School in Sterling. "This program reassured me that there is opportunity everywhere you go in many fields, whether it is government service, running a small business or working for a government agency like NASA."

Comstock grew up in Springfield, Mass., but remembers the influence of her first visit to Virginia, a third grade family trip to Colonial Williamsburg.

She remembers sitting in the historic Capitol building — in the town where Jefferson studied law with George Wythe — and thinking for the first time that she could be a lawyer too.

“I think that was the first time I wanted to be a lawyer … I was struck by how these ordinary people did such extraordinary things.”

The trip was typical of the influence of her mother, Sally Burns, a long-serving teacher and school administrator. “We would read biographies and then go visit the places we read about,” she said. “I developed a real sense of history.”

Comstock says her mother has been the most influential person in her life. “My mom is definitely my best friend, that’s been one of the great parts of my life.”

Burns introduced her daughter to politics as well as history, but from the opposite side of the aisle from where Comstock currently sits. “My mom was a Ted Kennedy girl — back when Rose Kennedy was doing teas” for campaign events, said Comstock.

Now Burns supports her Republican offspring. "My mom has been very active since my first campaign. My parents live with us, and the fun thing is that our whole family campaigns together.”

Comstock’s politics are much different than those of the unabashedly-liberal Kennedy.

She worked for two terms as an aide to Wolf, and headed the public-affairs branch of President George W. Bush’s Justice Department. The National Review, in its endorsement of Comstock, said, “Comstock’s strong conservative presence in Richmond has earned her high marks from, among others, the National Rifle Association, the Family Foundation of Virginia, and the Virginia Chamber of Commerce, which awarded her its 2012 Free Enterprise Award. She has also received the endorsement of pundits such as Mark Levin and Sean Hannity.”

Pat Herrity, a Republican member of the Fairfax County Board of Supervisors, said, “Barbara is exactly the type of common-sense conservative leader we need to pull the party and district together and win this.”

But despite her conservative credentials, Comstock seeks to emphasize her willingness to reach across the aisle and work with Democrats. She points to her work on human trafficking issues, where her bills toughening criminal penalties and increasing support for victims received near-unanimous support in the Virginia General Assembly.

Kate O'Beirne of McLean, a former Washington editor of the National Review and co-chair of the Catholics for Comstock Coalition, said, "While seeking common ground for the common good, Barbara has remained deeply committed to her strong values. She is a staunch supporter of working to create a culture of life and has led the fight on behalf of victims of human trafficking.”

Comstock has the endorsement of the outgoing incumbent, who was out knocking doors with her on the first Saturday in October.

“No one will work harder for the 10th District than Barbara Comstock,” Wolf said. “She’s honest, ethical and her energy and ability to get results will make her a great congresswoman.”