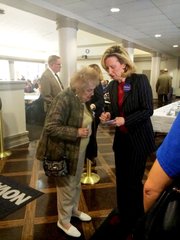 Barbara Comstock, the Republican candidate in the hotly-contested 10th district Congressional race, was on a tight schedule. After speaking before a crowd of military veterans on Saturday morning, her campaign staff was nudging her out the door, reminding the candidate that the breakfast was the first of several campaign events on her calendar that day.

But Comstock lingered when several guests stopped her to shake hands and ask questions.

Gloria Kukler, 73, was one of them. The Fairfax woman, who attended the event with her husband, Robert, a military veteran and Fairfax attorney, was visibly distressed as she waited near the stairs to talk with Comstock. When Comstock noticed Kukler, she put her arm around the woman and asked one of her aides for a pad and pen to jot down notes.

“I wanted to know if she could help my son get a part-time job, because he has a broken back,” Kukler said after speaking with Comstock. “I’m happy that she took the time for me … She’s a very caring person. I hope she makes it.”

Although Comstock was one of four speakers at the event, it was clear she was the candidate guests came to hear.

“We’re both veterans, and I like the fact that Barbara takes the time to address the issues that affect female veterans,” said Jill Westeyn of Oak Hill, who served in the U.S. Air Force for more than 13 years before retiring. “She has a strong bi-partisan record, she has shown she is in favor of job growth. I trust her to get things done in Congress.” 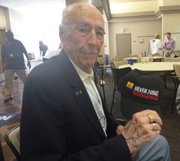 THE VETERANS were men and women, young and old, some in uniform and some in plain clothes. John Shroeder, a retired U.S. Navy veteran in his seventies, held his cap with the words “Never Forget Benghazi” throughout the breakfast.

“I think Congress needs to get to the bottom of the Benghazi debacle,” Shroeder said. “I can tell you this cap has been a real conversation starter. Several people have asked me about it.”

Before the breakfast began, Matt Ames, chairman of the FCRC, led the crowd in the Pledge of Allegiance.

When Comstock arrived, she walked around the room greeting supporters, and instead of waiting backstage for her turn at the podium, she took a seat at one of the tables as the program began.

“She will light up Congress. She works on ‘real kitchen-table issues’ that affect veterans, such as the cuts from sequestration,” he said.

Lingamfelter, a candidate for the 2013 Republican nomination for lieutenant governor, told the crowd that “nobody works harder than Barbara. She has huge shoes to fill, but she will do it.”

When it was Comstock’s turn to talk, she engaged the crowd by asking them a few call-and-response questions. “How are you doing this morning?” Comstock, who bills herself as a “commonsense conservative,” hit the main GOP talking points during her brief speech.

“I can promise you this: I will take a bipartisan spirit into Congress,” she said, drawing applause from the audience.

She said she would work to repeal and replace “ObamaCare, which already has caused millions of hardworking Americans to lose their health insurance and have their wellbeing and financial health threatened.” 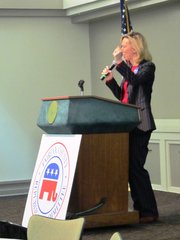 Lindsey Smith, a U.S. Air Force veteran from Oak Hill, said Comstock had the “personal touch” to connect with voters.

“As a state representative, she knows the issues and she knows the district. She will hit the ground running … She’s been working across the aisle to get things done at the state level. She won’t have to be brought up to speed,” Smith said.

Gary Schnurrpusch of Burke Center, a U.S. Navy veteran, said he was favoring Northern Virginia’s GOP ticket this election, but he wanted to hear candidates talk more about reform.

“Too often we hear platitudes, and I want to hear about the larger issues. The Republican party is too fractured right now, and we need to bring the party together,” Schnurrpusch said.

Diane Schnurrpusch said she was tired of hearing the Democrats saying the Republicans were waging a “war on women. I think it’s a false issue. Women aren’t fooled by it.”

The event concluded with a speech by Republican Suzanne Scholte, who is running against incumbent Democrat Rep. Gerry Connolly in the 11th Congressional district.

Although candidates did not offer to take questions, Scholte took a question from a veteran and historian, who asked what she had to say about the “War on Women.”

“We won,” Scholte shot back.