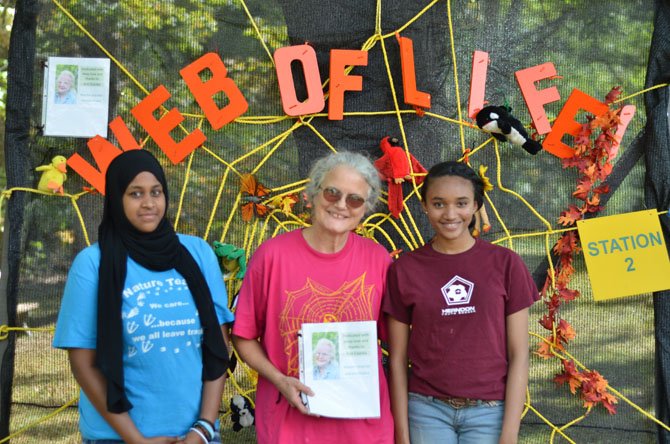 Baraa Abdelhafiz, Beth Hardesty and Reem Osman talked to visitors about the web of life at the 2014 Herndon NatureFest held at Runnymede Park. The Friends of Runnymede dedicated the day’s work to Ann Hopper Csonka who passed in March 2014. Photo by Ryan Dunn.

The Friends of Runnymede Park and the Town of Herndon Parks and Recreation Department hosted the annual NatureFest on Sunday, Sept. 28 at Runnymede Park. Nearly 700 local residents and neighbors enjoyed learning about birds, bees and butterflies, recycling and native plants, and life in a meadow or stream. Families and children had the opportunity to explore nature stations throughout the park and animal shows throughout the day.

Arts, crafts and fun for the whole family were included at NatureFest. The mission of the Herndon-based, nonprofit Friends of Runnymede Park is to protect, enhance, and preserve the physical, natural, and cultural heritage of the public parkland in the Town of Herndon. It assists the town of Herndon in the stewardship of the 58-acre natural park.

Jennifer Burghoffer, a wildlife rehabilitator with the Blue Ridge Wildlife Center, spoke to visitors at Runnymede Park about local wildlife native to northern Virginia. The Blue Ridge Wildlife Center rescues and provides veterinary care and rehabilitates animals from Virginia, Maryland and West Virginia. Located in Millwood, Va. the center does not charge for services and depends on donations.

Beekeeper René Garcia has been keeping bees as a hobby for years and answered questions about beekeeping at the 2014 Herndon NatureFest at Runnymede Park in Herndon, VA.

“What I like most about NatureFest is sharing the importance of honeybees,” said local beekeeper René Garcia. Garcia has been keeping bees as a hobby for years and answered questions about beekeeping. This year was a difficult year for beekeeping as winter was harsh. “Less bees means less honey,” said Gracia.

Volunteers with Herndon Environmental Network (HEN) hosted a plant swap and spoke about how native plants are important to animals. HEN was founded in 2011 by a group of Herndon area residents concerned about environmental issues. They work to improve the environment through education, initiatives and advocacy in the greater Herndon area.

Near Sugarland Run Stream, a station was set up on aquatic invertebrates found in the stream. “I think NatureFest is a great way to make contact with a younger audience then we are used to,” said Dan Schwartz, a soil scientist with the Northern Virginia Soil and Water Conservation District. Also at the nature station were two faculty members of Herndon Hutchison Elementary, Madhuri Nagarkar and Melinda Markfelder. “The kids get really excited about coming to NatureFest,” said Markfelder. “I like how there is a bit so something for everybody.” Volunteers were at stations throughout the park, showing off the park fields, stream and woods. 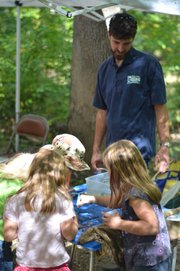 Dan Schwartz, a soil scientist with the Northern Virginia Soil and Water Conservation District spoke about macroinvertebrates at the nature station near Sugarland Run Stream at Runnymede Park.

“It is a wonderful event, fun for kids of all ages,” said former Herndon mayor Carol Bruce, a member of the Friends of Runnymede Park board. Herndon resident Beth Hardesty helped explain the “web of life” role-playing game to young visitors.

The Friends of Runnymede dedicated the day’s work to Ann Hopper Csonka who died in March 2014. Ann and her husband Dr. John M. De Noyer were involved in community activities and environmental education. Ann and John DeNoyer founded the Friends of Runnymede and created the first NatureFest. “She taught me and passed on her teachings to many generations,” said Hardesty. “Runnymede Park is a hidden gem in Herndon.”

For more information about the Friends of Runnymede Park, visit www.frpweb.org.