People At Work: Crafting a Floral Centerpiece in Alexandria
Votes

People At Work: Crafting a Floral Centerpiece in Alexandria

The art of flower arrangement 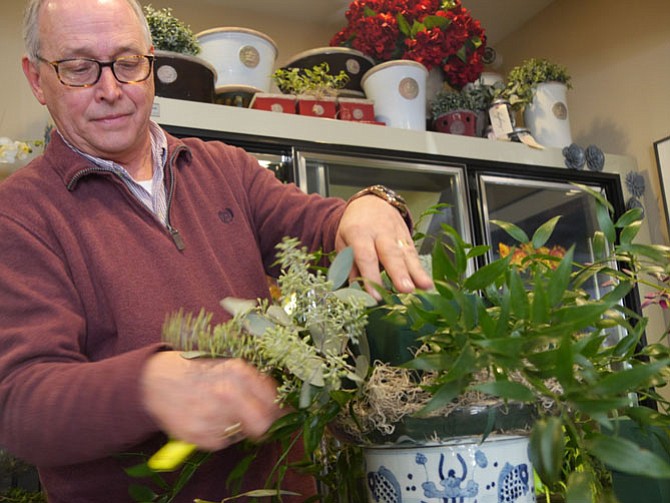 Scott Marchand puts the greens in first on his centerpiece floral arrangement of fall tones at Patina on Franklin Street. Photo by Shirley L. Ruhe/Gazette Packet

Scott Marchand puts hanging amaryllis in the green foam oasis rings. “See how it is giving it a kind of cascading look. I put my greens in first, “ he says. “This is going to be an open, airy floral arrangement in fall tones as a centerpiece for a table. So it will be designed to look good all around and perfect for a Thanksgiving table. “I’m more of a European designer, not Western; you know that roundy, moundy pom, pom stuff. And,” wrinkling his brow, “I never use carnations.” He says local suppliers know his style and sometimes call him to remind him of an interesting flower that is available. 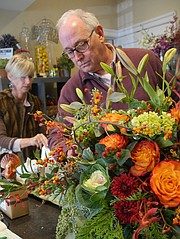 Scott Marchand adds an accent of circus roses as “a river of color going through the arrangement.” Amanda Dorko, who owns Patine with Kimberly Weiler watches as the arrangement takes shape.

The customer for this morning’s order at Patina on Franklin Street asked for certain kinds of flowers. He takes out the bittersweet branches dotted with orange berries. “This adds color.” Next come the large, white balls of hydrangeas. “They add a different depth and shape, also texture. “ Marchand stands back and looks at the emerging arrangement for a moment, then adds hydrangeas to key spots. He pulls the circus roses and lilies out of the cooler behind him. “The lilies add height. I wish you could see the lilies. By tomorrow they will be open, and you could see the fullness of the arrangement.” He strategically places the roses together in “a river of color running through the arrangement.” He says this is so you can see the bottom of the arrangement.

Marchand said he has been doing this since 1981 when he owned Flowers Unique for a while. Then on to Marchand Limited in Del Rey. Next another shop, “you know that warehouse on Royal,” and back to Flowers Unique before retirement a year ago. He met Kimberly Weiler and Amanda Dorko who own Patina, a furniture and gift shop, and started working with them as an add-on arranging flowers. The inspiration began in high school when he was delivering flowers, and the woman at the flower shop started teaching him the basics. On to college where he majored in political science but “it wasn’t for me.”

In his southern accent, not completely lost from living in Memphis, Marchand says he doesn’t like to manipulate flowers, “I like to have them look like they are growing.” Every arrangement is different. He starts out with the color and size. “I like different flower shapes and multi-dimensional.” There is no rule of thumb to always add threes or odd numbers of flowers. Just make it look pretty.”

At this time of the year he is working on arrangements and wreaths for the holidays. He said he is also doing a house for the upcoming Scottish Walk in Alexandria. “I will do a centerpiece for the dining room table and in the kitchen a taller accent piece for the island that doesn’t take up a lot of room.”

Half an hour later after visualizing the arrangement step by step to add texture, height and dimension, Scott Marchand gives one last look to his final work of art.

People buy flowers all year round. “Some people can do their own flowers, and some people just can’t.” But he said flowers used to be really big in the ‘90s and then they slowed down. “The economy I think.” His knife slices easily through the stems of white kale that will be inserted to add more texture. “I can always tell when someone has borrowed my knife,” he says. It’s like your kitchen chef’s knife. It’s not the same afterward.” Finally he adds the blue thistle. “A little bit of blue ties it all together with the colors in the vase. Just add this and I’m done.” After working quickly for half an hour with the finished vision in his head, Marchand stands back to survey the finished centerpiece. He drawls, “Ah hope she likes it.”