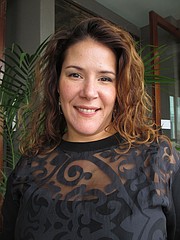 Vienna native Danielle Talamantes makes her onstage debut at The Metropolitan Opera in February, 2015. A chartered bus was hired to take friends, family and fans to the performance on Feb. 13.

Danielle Talamantes’ life story sounds like a Hallmark made-for-TV movie. Local girl sings in community, takes her voice to next level in international competitions, is discovered by agent of New York’s Metropolitan Opera. Girl understudies for three years and in February, 2015, makes her onstage singing debut there in “Carmen,” singing all eight performances when the production resumes in February.

“I feel so ready, so at-home at the Met,” said Talamantes. “I just can’t wait to be onstage with colleagues I’ve come to know and love.”

TALAMANTES CHOSE Virginia Tech’s Music Department over conservatories because, she said, conservatories seemed too intense of an environment. Besides, she wanted to experience traditional college life. “Turns out that it was the best of both worlds.”

In her senior year at Tech, she had a tonsillectomy, but elected to stay in Blacksburg working with a voice coach. She took a year off from college between her undergraduate and graduate school years. When she returned to Vienna after getting her Master’s degree from Westminster Choir College, Talamantes knew her voice was still in the developmental state. She started a voice studio in 2001 and worked at Harmonia for a couple of years. She worked at Vienna Presbyterian Church and started her own private studio there.

The bridge between training and making it to the big-time is competitions, national and international ones, and for several years Talamantes competed internationally. It was at a New York City competition in 2009 when one of the judges recognized Talamantes’ talent and hired her at The Metropolitan Opera. Her contract has been renewed every year and in February, Talamantes will make her stage debut there as Frasquita in Bizet’s “Carmen.”

A coach bus has been chartered to take family, friends and fans of Talamante to her performance at the Met on Feb. 13, 2015. The coach is open to the public with advanced booking. Guests will spend the night in New York and return to Vienna the following day. Rooms have been blocked at the Empire Hotel, 44 West 63rd Street, New York, NY 10023 at a rate of $209 per night for a deluxe king or a double/double. Reservations for hotel room are made directly with the hotel.

ON NOV. 23, at Vienna Presbyterian Church, Talamantes hosted a CD-release concert and reception to thank her supporters and promote her debut album, “Canciones Españolas,” a collection of classical Spanish music – canto lirico - from Spain and Central and South America. “It’s in my blood,” said Talamantes, whose father’s side of the family comes from Mexico. “I think people really need to hear this music.”

For her debut album, Talamantes partnered with esteemed classical pianist, Henry Dehlinger, of Vienna. Talamantes admits there was an element of “risk” debuting with a collection of not widely-known Spanish “art” songs, but the Vienna native, a soprano, recognizes the wealth of repertoire available. “Rather than seeing this collection as a risk, I see it as a unique shoe of Spanish canciones,” Talamantes said.

Talamantes and Dehlinger met through a mutual friend at Vienna Presbyterian Church about three years ago. After many casual jams in which the two teamed together, they came up with the idea of producing an album.

When she’s not touring the country in operas or concerts, Talamantes continues to operate her voice studio in Vienna. Her dreams are falling into place.

Talamantes now has an agent working on her behalf in New York. “During the last 18 months, it’s finally happening,” she said.

TO SIGN UP for the Met-bound bus trip on Feb. 13, email leslie3156@aol.com. To learn more about Danielle Talamantes and her schedule, go to www.danielletalamantes.com/.