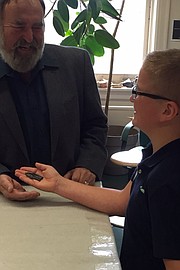 Ten-year-old Noah Cordle of Lorton became an overnight celebrity in August after literally stumbling upon a thousands of years-old arrowhead while on vacation in Long Beach Island, N.J. The Asbury Park Press first broke the story and soon national newspapers and television programs were hounding the Cordles for interviews.

Earlier this month, Noah decided to donate the stone to the Smithsonian Institution for an exhibition underway including arrowheads and other clovis points. The Archaeological Society of New Jersey president Greg Lattanzi determined Noah’s stone is jasper, between 8,000 and 11,000 years old.

Dennis Stanford, a Paleoindian archaeologist with the Smithsonian’s department of anthropology, invited Noah and his mother Andrea to visit the museum and hand off the artifact. Stanford showed Noah other pieces that are similar to the one he found.

“It was pretty cool,” said Noah. “I learned what it was used to hunt with, what animals they hunted, like mammoths and mastodons.”

Andrea said the experience was a great educational one for her son. “This was not on his radar at all,” she said. “The Ice Age, the Paleoindian thing. The learning’s been incredible.”

Noah will receive a replica of the arrowhead he found and is happy to step out of the spotlight, for now.

“I still feel like a celebrity, kind of,” he said. “I’m ready to go back to being a normal kid.”