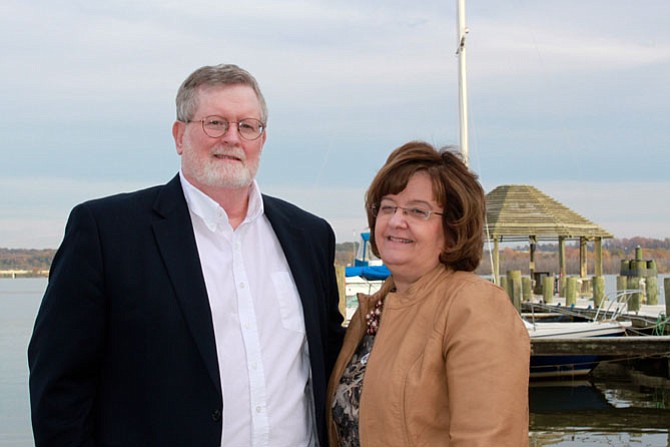 Robert Prather and wife Karen out on Old Town Alexandria’s waterfront. He is uncovering Swift’s tracks around Lake Fairfax. Photo by Reena Singh.

Robert Prather has spent years trying to figure out the real Jonathan Swift - the man behind the legends of pirates, treasure and mystery.

After his most recent visit to Alexandria and Lake Fairfax - two areas that Swift called home during his time - he is piecing together the third edition of The Strange Case of Jonathan Swift and the Real Long John Silver.

“When you have 50 percent, 60 percent of the pieces, you know what the picture is going to look like,” said Prather, a Kentucky native. “You don’t have to find everything, but the more you find, the more interesting it becomes.”

He likened his research in the area to his original love for treasure hunting. That was before he started researching about Swift.

“I was interested for a long time with treasure hunting as a hobby,” said Prather. “Most of the time, it involved us going around old houses and coinshooting. One of the things I became interested in during that time was about the legend of Swift and his mines.”

He said that his friends in Kentucky all knew about the legends of Swift and he was surprised that the people he knew in Fairfax County did not know as much.

From his research, and finding out about the organization and planning it took to take gold from Northern Virginia to what now is West Virginia and Kentucky, he thinks that Swift’s mines were part of the national treasury. “There was definitely a mining operation within a stone’s throw away from where Prospector Pete’s is,” he said. “I’m thinking that Lake Fairfax could have been the quarry. So many of the original quarries were filled with water.”

Not only did Swift own property, including a tavern, around Lake Fairfax, but he also owned the property now known as Mammoth Caves.

One of the most recent discoveries that will be included in Prather’s third edition of the book is a story about Bill Gibson, a man who went treasure hunting in a cave on Hollow Mountain. According to Prather, Gibson found several Spanish coins there, which harks back to a Swift legend of seven coins buried in a cavern.

Lake Fairfax unveiled its water mine water park over the summer the same time it celebrated the inaugural Pirate Festival.

Prather was invited to sign books at the event and the festival was held on the land of a man who was considered a legendary pirate for years.

“I thought it was great,” Prather said. “There is truth in the legend. So why not the treasure story.”

Robert Louis Stevenson actor and scholar Keith Decker praised the book, stating “An intriguing narrative, fully researched and illustrated, setting in motion a provocative tale of lost treasure and encoded clues contained in Robert Louis Stevenson’s epic tale. Robert Prather has shed new light on Treasure Island and will be the topic of much debate.”

For more information about The Strange Case of Jonathan Swift and the Real Long John Silver, visit http://www.acclaimpress.com/store.aspx?panel=3&productid=146&categoryid=4.