Voters turn out for mid-term election. 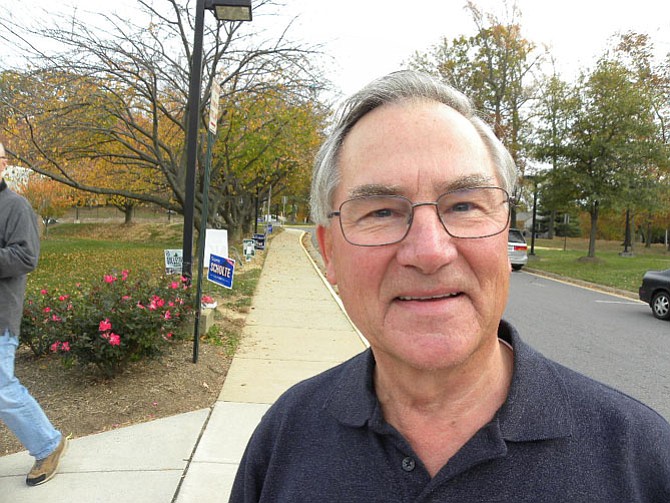 Allen Griffith, Fairfax City “I did support Mark Warner for Senate. I think he’s done a good job... and I look forward to him serving another six years.” Photos by Abigail Constantino/The Connection

Jon Chu, of Fairfax City, entered the polling booth at Christ Lutheran Church on Meredith Drive, ready to experience civic duty in action. Except he is only 14. Accompanied by his grandparents, Chu is there to help them translate and understand, as they vote in Virginia’s 11th Congressional District, on Tuesday, Nov. 4.

Two referendums were also on the ballot--one to exempt from taxation of real property the surviving spouse of any member of the armed forces who was killed in action, and another to allow the Board of Supervisors to acquire funding for transportation improvements and facilities.

“It’s a consistent turn out,” said Christ Lutheran Church precinct election official David Gessert. “We’ve been having a nice steady flow throughout...about a voter and a half every minute.”

Deputy chief of precinct 5, Fairfax High School, Matt Prestone said that almost 700 voters have gone through. “It’s been steady,” he said. At the Stacy C. Sherwood Community Center precinct the busiest time as of 4 p.m. was from 10-11 a.m. “It should pick up slightly after work but not a whole lot,” said election officer Sam Fisher.

Unlike most of Fairfax County, the city of Fairfax did not use the new voting machines, which used a paper ballot that was also scanned. Instead, it used the machines used in recent previous elections. “Tried and true,” said Prestone. He said that the reason the county used the new machines is to make sure that there is a paper ballot.

The economy was a prime factor in voters’ decisions. Johnette Peyton, of Fairfax, said she wants to make sure Northern Virginia’s economy rebounds. But fulfilling one’s civic duty was also prominent. Jake Quartuccio believes that everyone should practice the right to vote. “I think we take it too lightly,” he said.