Vienna mom and her son shopping at Oakton gift store when 87-year-old motorist plows SUV through the store. 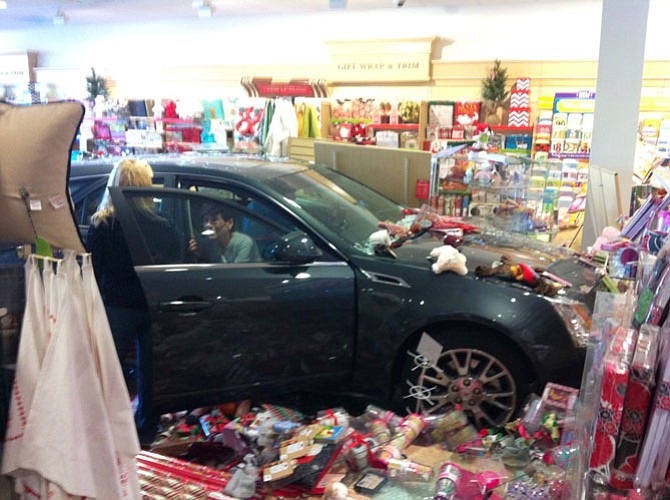 A salesgirl at the Oakton Hallmark store helps the passenger out of the car after her husband, 87, accidentally plowed his Cadillac SUV through the gift store on Monday, Oct. 29. Photos by Shadi Peikari 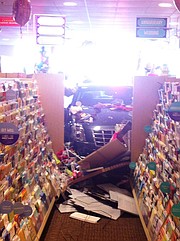 Vienna mom Shadi Peikari and her son, Bayan, 13, were in Abbey’s Hallmark in Oakton Shopping Center on Monday, Oct. 29. when an elderly motorist accidentally jumped the curb and smashed through the window of the store in a Cadillac SUV. The car tore through the store, finally stopping at the gift card section in the back of the store.

Bayan Peikari, 13, was on a routine shopping trip to check out Halloween decorations at Abbey’s Hallmark in Oakton Shopping Center on Monday, Oct. 29., when an elderly motorist accidentally hit the accelerator of his Cadillac SUV and crashed through the gift shop.

What started out as a routine after school trip to the Oakton Library last week turned into a real-life disaster film for one Vienna mom and her son.

Monday, Oct. 29, was pleasant fall afternoon, so Shadi Peikari and her son, Bayan, 13, made a last-minute decision to walk to Abbey’s Hallmark store in the Oakton Shopping Center.

It was a decision they would soon regret.

“We were looking at Halloween decorations, and we saw a mirror we liked,” Shadi Peikari said. “I asked the sales girl to see if it came in a box, and we started to walk to the back of the store with her.”

At the same time Peikari and her son were following the salesgirl to the back of the store, an 87-year-old man and his wife were preparing to back out of a parking space directly in front of the gift store.

Instead, the elderly motorist hit the gas pedal, jumping the curb and plowing his Cadillac SUV through the display window, tearing straight through the store to the back of the gift shop.

The driver later told authorities he had accidentally hit the gas pedal when he thought the vehicle was in reverse.

“At first we heard a tremendous crash. A very, very loud crash…When I turned around, I saw the ceiling moving and the sound was getting closer,” Peikari said. “I thought the building was collapsing, or maybe someone had attacked the building. I heard people screaming ‘run, run.’ The salesgirl waved us over ‘here, here!’ We didn’t know what was happening.”

Bayan Peikari said he felt like he was in the middle of disaster film.

“It was like all the destruction was coming towards us,” the teen said. “The ceiling was falling down, a shelf fell on my leg and I couldn’t walk for a few days. If my mom hadn’t pulled me out of the way, I would have been flattened like a pancake.”

“I grabbed Bayan’s hand and yanked him with me as we ran as fast as I've ever run in my life. Honestly, I couldn't feel my legs at all, and thought I'd collapse because I couldn't stand.”

Peikari said glass was flying everywhere as she ran to the back of the store with her son. She said she heard what sounded like a train barreling straight towards them.

“I still didn’t know what was happening, only that this sound was getting louder and louder and I was terrified,” she said.

“When we reached the back of the store, I’m holding Bayan, shaking, and then, boom! We see a car come through and stop. I could not believe my eyes…I mean this massive car was suddenly in the card aisle,” Peikari said.

Ana Mastrogiuseppe, a cashier working in the store at the time, told authorities she initially thought a customer had broken a plate, but soon realized it was more serious. She said the car accelerated as it went through the store.

Firefighters at the scene reported no serious injuries; however the building sustained some structural damage, according to reports.

“It was a miracle everyone was ok. Thank God everyone survived,” Peikari said.