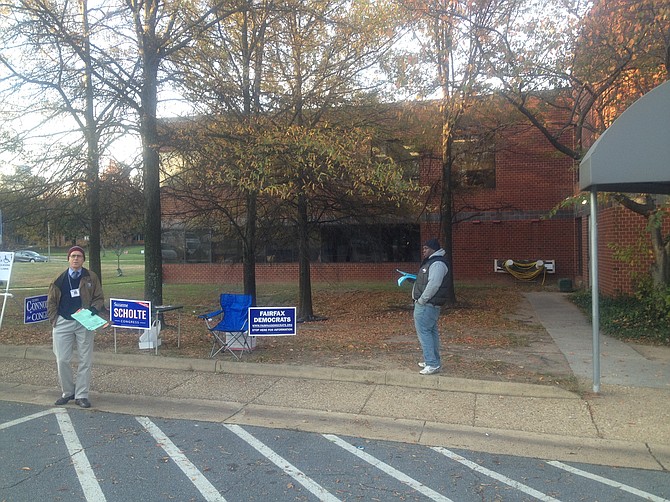 Outside the Cameron Glen Drive office in Reston, voters had the opportunity to pick up information on the midterm election. Fairfax County has the largest number of voting precincts in Virginia, with 238 voting locations spread throughout the county's 395 square miles. Photo by Ryan Dunn.

Midterm elections were held throughout Virginia on Nov. 4, with voting stations open at locations throughout the commonwealth’s 95 counties. “There will be approximately 2,500 election officers working at the county’s 238 precincts,” stated Lisa M. Connors, public information officer for Fairfax County. For a midterm election, this is about the average number of staff used to process votes and provide citizens with the opportunity to use their right to vote.

Fairfax County has the largest number of voting precincts in Virginia, with 238 voting locations spread throughout the county's 395 square miles.

At the Herndon-Reston District Health Department, located at 1850 Cameron Glen Drive in Reston, voters entered in to cast their votes.“It has been a slow but steady turnout,” said Election Officer Ginger Seeley who worked at the Cameron Glen Drive location.

Another change to this year’s elections in Fairfax County was new voting equipment. “This is the first general election we will be using them,” said Brian W. Schoeneman, member of the Fairfax County electoral board. The new polling machines are the ES&S DS200, a precinct-based, voter-activated paper ballot counter and vote tabulator.

One issue put to vote includes a $100 million transportation bond question. If approved, the money will provide pedestrian and road improvements to increase roadway capacity, reduce congestion, improve safety and improve transit access. Money would also be made available for bicycle improvements that include new bicycle facilities, trails, and bicycle parking. Pedestrian improvements would be made possible at sites including Reston’s South Lakes Drive walkways and Sunrise Valley Drive walkway. Organizations including the League of Women Voters, Partnership for a Healthier Fairfax, and Fairfax Advocates For Better Bicycling (FABB) have advocated this bond issue.

Some of the morning voters included Reston residents Olga De Lapena, Bea Meltzer, and Caol Edwards, who cast their votes at the polling station at Cameron Glen Drive in Reston. “Last time we voted it was at the presidential election,” said Edwards. “I thought it was easy to vote,” said Bea Meltzer.

At Herndon Elementary School, citizens visited the school gym to cast their votes. “We always have a steady flow of people at this precinct,” said Herndon resident Eric Boll, who handed out information outside the school with Christian Kachel. All voting machines at Herndon Elementary were operational, and there was a good turnout for election officers. “We opened everything promptly at 6 a.m.,” said assistant chief voting officer Debra Gessel. Gessel and chief voting officer Robert Walker agreed the photo ID requirement had not been an issue at their prescient.

“I looked up the information on the candidates and it was pretty easy to decide who I wanted to vote for,” said Herndon resident Emily Bayer who casted her vote at Herndon Elementary.

“I just want to make sure Mark Warner stays in business,” said Herndon resident Phyllis Robbins. Robbins wondered whether the new photo ID rule may cause complications for senior citizens who no longer have driving licenses. The Fairfax County office of elections seems secure the public has been aware of the photo ID requirement. “I am confident that we have done everything that we could have,” said Schoeneman.