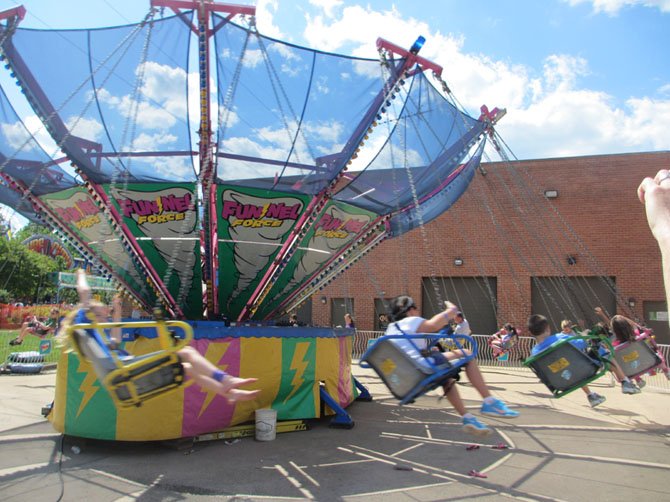 Young kids, older kids and teens had more than 20 amusement rides to choose from. Photo by Donna Manz.

Vienna Rotary could not have ordered a more ideal setting of blue skies and dry heat for ViVa! Vienna!, the club’s annual three-day festival running along the historic Church Street corridor, Saturday through Monday. ViVa! Vienna! is sponsored by the Rotary Club of Vienna, in partnership with the Town of Vienna.

“This is so Vienna,” said D.H. Scarborough, manning the Vienna Business Association booth. “The community is here together. “There’s food, vendors and fun.”

Church Street closed to vehicular traffic between Mill and Center streets on opening day, Saturday, May 24. Day one of the three-day festival brought in the amusement rides, entertainment on the main and the kids’ stages, and food vendors.

For many families, Saturday kick-off meant shorter lines at the amusement rides, although the spring-like weather drew in a greater number of visitors than usual, it appeared. The spider jump had the longest line on Saturday. Rides and music were the big draws on opening day.

ON SUNDAY AND MONDAY, Church Street was closed for vehicles from Mill Street to Lawyers’ Road and ViVa! Vienna! took over the neighborhood from morning to night. Thousands and thousands of visitors to ViVa! Vienna! and hundreds of volunteers – from Rotary to other civic groups – filled the streets as 350 vendors sold food, goods and services. Live entertainment was presented on a children’s stage and the main stage, and, on Sunday, Vienna Idol offered all-day performances from its semi-finalists.

Vocalist Hannah Colbert, 17, paid tribute to her grandmother, former mayor M. Jane Seeman, when she kicked off Vienna Idol semi-finals with the National Anthem on Sunday at 11 a.m. “I think she’d be proud,” said Hannah. “I am more happy than sad. Yes, I think she’s ‘here.’”

Vienna Idol organizer Michael Amouri honored Seeman during the day. “There’s a void in the hearts of those who knew her,” he said, noting that Seeman was a big supporter of Vienna Idol, First Night Vienna and the Town Green. A white balloon flew up in the air when Hannah began to sing. “Everything you see here, Mayor Seeman had a part in.”

Amouri reminded guests of the solemnity of Memorial Day. A different vocalist singing the National Anthem preceded each round, and along Church Street, people stopped to pay respect.

A production team for the Food Network’s new program, “Carnival Eats,” set up early Sunday morning and returned on Monday. “Carnival Eats” host Noah Cappe chatted with ViVa! Vienna! visitors and Rotarians, alike. A highlight of their presence was segments with local people in which “Carnival Eats” brought carnival eats to “tasters” and videotaped their assessment. Cappe used his wit in his banter with such community luminaries as Mayor Laurie di Rocco, VVFD Fire Chief John Morrison, Vienna Rotarians, and, even a local newspaper reporter. Nobody in Vienna will know who made the video cut until late August, early September.

“We’re heading out into carnivals across the country,” said Cappe. “There are a lot of talented people with a passion for food, real food being cooked by passionate chefs. We talk to them about their process and we get opinions of their food from the people eating it at these carnivals.” Cappe remarked that some of the nation’s food vendors spend six to 10 months a year on the road.

ON MEMORIAL DAY at noon, Rotary paid tribute to the fallen. Local officials from the Town of Vienna to Congressman Gerry Connolly were scheduled to make comments at the Memorial Day ceremony. County officials stopped by ViVa! Vienna! as well. Fairfax County Sheriff Stacey Kincaid spent a large part of the day at ViVa! Vienna!, walking Church Street with Del. Mark Keam (D-35) and stopping by Vienna Idol.

The arms of the festival reach beyond the Vienna area.

The Rotary Club of Vienna, as a service and humanitarian club, gives back to the community its ViVa! Vienna! net proceeds. In 2014, Rotary is presenting checks to schools, nonprofits and the Town of Vienna equaling more than $167,000 collectively.

“ViVa! Vienna!’s what Vienna is all about,” said Scarborough.