Two new residents will join the town council in July.

Jennifer Baker and Stephen Lee Mitchell were voted into their new positions during the town election on May 6 at the community center.

“I was certainly hopeful that my hard work paid off and that my message would resonate in the community,” said Baker. “However, I did not know I would be the number one vote-getter.”

Additionally, Jasbinder Singh was elected as a council member again after a two year absence.

Mitchell, the youngest council member, said that his age has no impact on his will to serve his community. Rather, it is his passion. Although he grew up in Herndon, he has visited Costa Rica on-and-off for nine years and is fluent in Spanish.

“I moved to Latin America for a while,” he said. “Every time I traveled, I realized how special and unique Herndon is.”

He went to University of North Carolina - Wilmington and spent three months teaching English and surfing in Costa Rica. In 2011, he found his way back to the town where four of his past generations settled down. He now works as a residential mortgage loan officer at Virginia Heritage Bank.

“I’m super excited to represent the town and make sure it’s preserved,” he said. 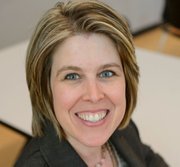 Jennifer Baker, a new face for town council, gains the most votes during this year’s election.

BAKER moved away from home as well. However, unlike Mitchell, her hometown is more than 300 miles away in Endicott, N.Y.

“Even though I grew up in a small town in upstate New York and went to college there, Herndon is home for me,” she said.

She has lived in town for 10 years now - and offers a fresh perspective - but felt she lacked the name recognition other candidates had when she began campaigning. To make up for it, she said she knocked on nearly 2,300 doors to get to know all the residents and find out what their needs were.

She also is fluent in Spanish, she said.

“Even though I won’t be knocking on doors this weekend, I will continue to be open-minded and analytical,” she said.

The councilmember who receives the most votes typically is appointed the vice mayor.

Jasbinder Singh was ousted from the council dais when he lost his election for mayor in 2012. He served one term previously as a council member.

“I had been working with the immigrant community, and I felt someone needed to protect their interests,” he said.

Singh has lived in Herndon for 33 years and rents out a building for tenants in town.

His initial reaction to the election was that he was surprised more of the community’s immigrant population did not take the time to vote, and those who did were younger members of the population.

He said his time off from serving on the council gave him time to find out about Herndon’s deeper issues. He began writing blog posts in his website, http://herndonopinion.com, about his feelings about council and town matters.

“We must ask questions and get to the details of matters,” he said.

LISA MERKEL remains mayor, beating Connie Hutchinson 1,308-1,066, according to tallies made at the Herndon Community Center.

“I think this is a sign that the town is open and excited about the possibility of the metro station,” said Merkel.

She said she was happy that her positive campaign worked in her favor, winning her another two years as mayor.

“To those running who took the high road and stuck to the positive issues, I want to thank them from the bottom of my heart,” said Merkel. “That’s what Herndon is all about.”

Hutchinson, who had served as the Herndon Vice Mayor, was proud of the support she gained during her election.

“I felt very honored to have the really strong support I had from the Herndon residents,” she said after the election results were posted at HCC. “I feel honored to represent the town as I had. I think there’ll be a lot of good debate on the council.”