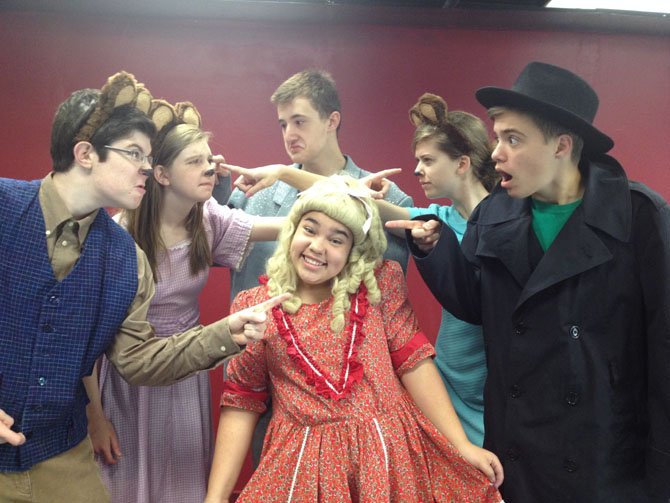 Somebody’s been inside the three bears’ home and eating their porridge. But did she commit a crime? That’s for the jury to decide in Chantilly High’s upcoming children’s play, “Goldilocks on Stage.”

Written by Chantilly Theater Director Ed Monk, the show’s being helmed by Director Shannon Khatcheressian, who says her cast and crew of 40 are doing a great job with it. And it’s been such a popular play over the years that Chantilly’s bringing it back to the stage now. 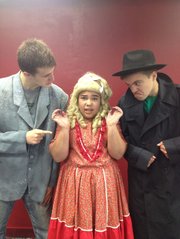 “It’s one of the first shows I directed here when I started at Chantilly in 2001,” said Khatcheressian. “And it’s one of my favorite plays because the writing’s so witty and the comedic timing is so much fun. And it truly appeals to the entire family.”

A variety of fairytale characters will comprise the jury and will be easily recognizable to young children. “It’s a fun challenge to make the show appealing to both children and adults,” said Khatcheressian. “We’re painting the courtroom in bright, vibrant colors and will hang cheerful pictures on the walls.”

Only Drama I and II students are in this play so, she said, “It’s a great opportunity for them to be in the spotlight. They’ve really embraced the physicality of their characters and how goofy and over-the-top each of them are.”

She likes playing Goldilocks because “there’s a lot of movement in the way she talks. She’s big and proud, but doesn’t use good grammar. This is my first lead, but she’s a strong, forward character who speaks her mind and has some funny lines.”

To capture children’s attention, said Castillo, “You have to make big movements and be really silly. They’ll like our fun and different characters. And some characters they won’t expect to see in this show, like pigs and wolves and jury members from ‘Cinderella’ and ‘Little Red Riding Hood.’ And there are jokes for both adults and children, so there’ll be something everybody will like; it’ll be entertaining for the whole family.”

Junior Mostafa Ahmed portrays Judge Wallaby. “He’s a lazy, distracted, loud and obnoxious person,” said Ahmed. “He doesn’t seem to realize or understand what he’s doing – which is obvious to everyone else around him. He’s also immature and changes emotions in a minute. He doesn’t want to be there and just wants to go home.”

Ahmed’s enjoying his first children’s show and big role. “Wallaby’s a fun character because he changes moods quickly and, as a teenager, I can relate. You don’t know what he’s going to do next because he’s complicated. I always try to make people laugh, so I wanted to take on a comedic role.”

He said the audience will like “the hilarious characters – everybody has their own quirks. The kids will be happy, and adults will have fun comparing this show to what happens in the real world.”

Playing Wombat, Goldilocks’s defense attorney, is freshman Jack David. “Wombat’s confident and sure of himself,” said David. “He thinks everything he says is true, even if it’s not. And he doesn’t get along well with others. Defending Goldilocks is just a job to him; he’s only in it for himself.”

David’s likes his part because Wombat’s “so over-the-top. It’s lots of work getting every aspect of his character right and translating the words on paper into his actions. But it’s a ton of fun to be able to stretch everything and make it funnier.” He said the audience will enjoy “the contrast between the serious characters and the dopey ones. And the costumes will be flashy and colorful and will really capture people’s attention.”

Freshman Anna Kiel portrays the district attorney. “She’s British, very proper and thinks she’s better than everyone,” said Kiel. “She’s a nice person, but she gets mean in court. She’s representing the three bears and trying to put Goldilocks in jail, and she’s calmer than the other characters, except for her movements.”

Her role’s fun, said Kiel, because “I get to question lots of people, and I might want to be a lawyer someday, so it’s good practice. And my character gets crazy during the trial and makes bizarre motions with her hands to act things out.”

Playing Baby Bear is sophomore Melissa Kapfer. “She has different personalities, depending upon who’s talking about her,” said Kapfer. “She’s actually snobby and a big jerk. She’s 17, but acts like she’s 10. She thinks everyone’s there to serve her and thinks her family’s a huge drag — and she testifies against her parents during the trial.”

“Since she’s so different than me, playing such a horrible person shows I can really act,” continued Kapfer. “And she’s so exaggerated that she becomes really comical.” Overall, she said, people will like this show’s funny characters and the “relatable humor for all ages.”