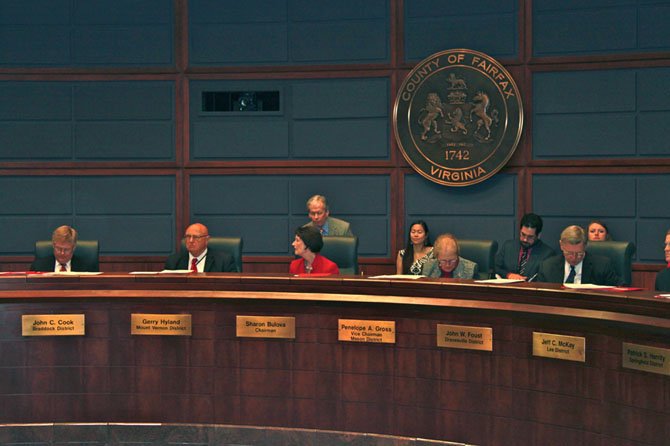 The Board of Supervisors passed the county budget in a 7-3 vote. Photo by Reena Singh.

Educators are not happy that the school district will receive $64 million less than they asked for next year.

The Fairfax County Board of Supervisors passed the county’s Fiscal Year 2015 budget, which includes a 3 percent increase in the School Fund Transfer, at the April 29 meeting.

“Our official position is that the funds are just not adequate,” said Fairfax Education Association President Kimberly Adams in a previous interview. “This is going to impede our abilities to compensate our employees.”

She and several teachers attended the budget markup earlier that month to make their presence known.

Fairfax County Public Schools will receive $1.928 billion from the county this year — an increase of 3 percent from last year. The Board of Education had asked the county for $64 million more to continue programs and proceed with scheduled teacher pay raises.

Non-uniformed government employees will receive an across-the-board 1 percent increase in their pay — a move that was commended by all supervisors.

The county police department, sheriff’s department, Fire and Rescue and Office of Emergency Management will receive a total of $426,864,290 from the general fund.

There was no discussion about the supervisors’ positions after the resolution motions were made. However, once they passed, Chairman Sharon Bulova thanked her budget committee and her staff.

“This was not an easy budget, and that is an understatement,” she said.

Herrity said he is concerned about the 7 percent increase that residents will see in their taxes for the FY 2016 budget if no changes in the recommendations are made. His statement was based off of a recommendation made during the Board of Supervisor’s April 22 meeting, but there has been no official agreement to increase the taxes for that year’s budget.

“If we don’t keep our priorities straight, we’re going to tax people out of the county,” he said.

He said his aunt has already moved out of Fairfax County because she could not afford to live here.

“I think we’ve got a board that’s not focused on our priorities,” he said. “If they don’t make changes, I’ll vote against it next year.”

Hunter Mill Supervisor Cathy Hudgins did not agree with some aspects of the budget, according to her comments at previous public hearings, but she voted for it anyway.

“With the adoption of the FY 2015 budget, and the lack of a [Board of Supervisors] consensus, it was clear that all residents in Fairfax County will feel the effects in some capacity,” she said in a press release. “However, based on correspondence received, my interactions with residents, and guidance from the Hunter Mill District Budget Committee, my approach to this year's budget remained philosophically consistent: attempt to not to inflict undue hardship on any one segment of the county, whether that be those who receive services, those who pay real estate and other taxes, those whom the county employ, those whom the county educates, or all of us who rely on the county to keep us safe.”