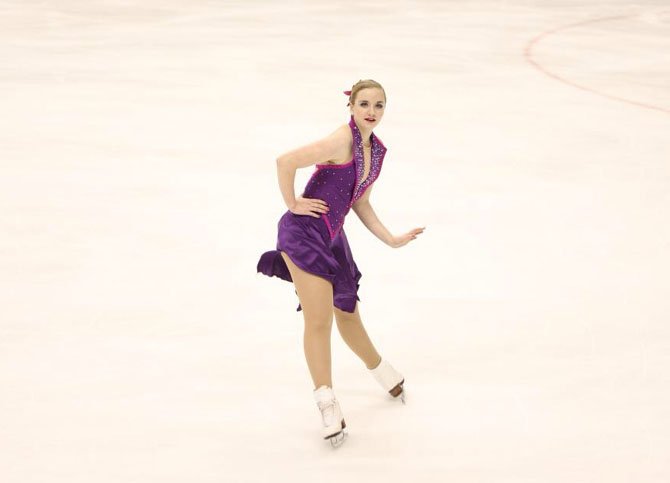 Brynn Thomas has been skating since age 5.

Since age 5, ice skating has been a huge part of Brynn Thomas’s life – and the Madison High freshman wouldn’t have it any other way.

She does synchronized skating and, she said, “The thought of going on slippery ice on tiny, thin blades is thrilling to me.”

In synchronized skating, team members skate to music in unison while demonstrating their teamwork, speed and ability to perform intricate formations and challenging step sequences. And Thomas and her teammates on the Arlington-based Capitol Steps competed recently in the Synchronized Skating National Competition in Colorado Springs.

“Figure skating is fun, but synchronized is a really beautiful sport,” she said. “And in synchro, you have a family and friendships. You’re also friends outside the rink. You form strong bonds with people you have something in common with.”

Thomas has been with Capitol Steps since she was 6, so she and her teammates have grown up together. They skate at the Junior Level, the second-highest competitive level, for ages 12-18.

THE TEAM practices weekends at the Kettler Capitals Iceplex in Arlington, from 5-10:30 a.m. Thomas also takes private lessons, three times a week, after school, at the Fairfax Ice Arena.

She skated at Nationals, Feb. 28-29, for her fourth time, having competed once before at Junior Level and twice in a younger category. “The first three times, we got into the top 10,” she said. “This time, we finished in the top 20.”

But considering the season they had, said Thomas, she and her teammates were just happy to be there. “We had a pretty rough season, with a ton of injuries, including to myself,” she explained. “I fell while jumping during a private lesson, torqued my back and cracked my spine. So doing certain moves after that, I was in pain. I did that in November, and I’m almost finally recovered now.”

They found out they made Nationals after a competition in Hershey, Pa. “We were really happy,” said Thomas. “We felt like we deserved it and that it was our time. We’d overcome so many hurdles and injuries that we were just relieved.”

Being there, she said, was stressful, but exciting, “knowing it was our last skate of the season and we had to give it our all. But it was very fun. Being up so high in the mountains made it a little difficult to breathe, but we trained hard to get our endurance up and make sure we were prepared for the [elevation] change.”

The Capitol Steps performed a short program of 2 minutes, 30 seconds to a medley of songs from Cirque du Soleil shows. The team also skated a long program of 4 minutes, 20 seconds to jazzy, almost 1920s-style music.

“We were exhausted from all the practice, so we were all just happy that we stuck it out and did our best,” said Thomas. “We felt proud of ourselves.”

THE HARDEST PART of synchronized skating, she said, is “knowing you’re surrounded by 14-16 other girls and you have to be spot-on and move as one person.” But she loves it because it’s “so unique. You can’t make a circle or a wheel with just one or two people, and the patterns look just beautiful.”

Now, even though the competitions are over for awhile, Thomas will continue skating. In July, she’ll go to a week-long Synchro Camp in Ohio. She currently spends one hour a week at Kettler teaching young children who are just learning how to skate and jump. During the summer, she’ll teach them all week long.

“I love it and I really want to keep doing it through high school,” said Thomas. “It’s so much fun working with the kids; I think I’ll always skate or teach others.”