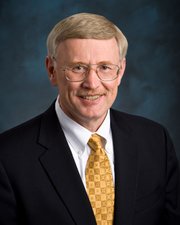 John Foust was re-elected to the Fairfax County Board of Supervisors in 2011, winning every precinct and more than 60 percent of the vote. He serves as Chairman of the Board’s Audit Committee, Vice-Chairman of the Budget Committee and Chairman of the County’s Economic Advisory Commission. He cites his leadership in expanding full day kindergarten to the entire county and funding the widening of Route 7 to ease congestion for commuters as successes. He lives in Mclean, and has been married to Dr. Marilyn Jerome for 30 years. They have two sons, Matthew and Patrick.

The Tenth Congressional District Democratic Committee (10th CDDC) announced Monday, March 17, it had cancelled its April 26 convention after Foust became the only candidate to file to seek the Democratic nomination for Congress.

"To win this race in November we needed to avoid a costly primary and coalesce around a nominee as soon as possible," said Committee Chairman Charlie Jackson in a statement regarding the decision. "We’ve done that and we couldn’t be happier that John Foust will become our nominee and have the ability to hit the ground running right away as our standard bearer."

"I am very grateful for the support I’m receiving across the district," Foust said Tuesday morning. "I believe we’re unified because we represent the concerns and priorities of the residents of the 10th district, and I look forward to continuing the campaign through November and having a discussion on the issues with whomever the Republican nominee is."

Jackson said the move on Monday will give Democrats an edge in building widespread district support for Foust before a Republican nominee is named in a "firehouse primary," also called a party canvass, slated for April 26.

Democrats had anticipated McLean attorney Richard Bolger would continue his bid for the nomination, but Bolger announced he was suspending his campaign late last week.

In a news release, Bolger said it became clear to him that "John Foust is our strongest choice with the best chance of helping our party win this seat and change the direction of Congress,"

ON MONDAY, Jackson praised Bolger and his campaign.

"Richard Bolger has been a class act from day one," Jackson said. "He put together a top-notch team and demonstrated an ability to raise hundreds of thousands of dollars. That’s no small achievement."

"John Foust is the only problem solver in this race," said State Sen. Dave Marsden (D-37), a longtime Foust friend and supporter. "His most well-known potential opponents are tea party types. Even Frank Wolf can't be happy about the Republicans in this race. He has little use for this wing of the party and has publicly said so."

When Foust entered the Democratic primary for the 10th Congressional District in December, he seized on the public’s negative perception of Congress often stuck in partisan gridlock, citing both parties’ "reckless brinksmanship." Foust’s campaign focused on bringing a fresh face to Washington.

Foust quickly racked up a slew of endorsements from more than 50 former and current elected officials, including Lt. Governor Ralph Northam and Congressman Jim Moran (D-8), who later announced he would not seek reelection.

Foust’s momentum had a rainmaking impact on donors. In late January, Foust reported raising more than $217,000, with nearly that amount -$210,000 – reported as cash on hand.

WITH MONDAY’S ANNOUNCEMENT, Foust now has more than a month head start campaigning against an unknown Republican challenger.

"We expect he will take advantage," Jackson said Monday.

According to the 10th Congressional District Republican Committee, six candidates will compete for the Republican nomination, Del. Barbara Comstock, Stephen Hollingshead, Howie Lind, Del. Bob Marshall, Marc Savitt and Rob Wasinger. The Republican nominee will be decided in a Party Canvass on Saturday, April 26 at 10 different locations around the District. For more information on the candidates and the Party Canvass contact chairman@vagop10.org or visit the 10th District website at vagop10.org.