‘We Formed Bonds of Friendship at Archer’
Votes

‘We Formed Bonds of Friendship at Archer’ 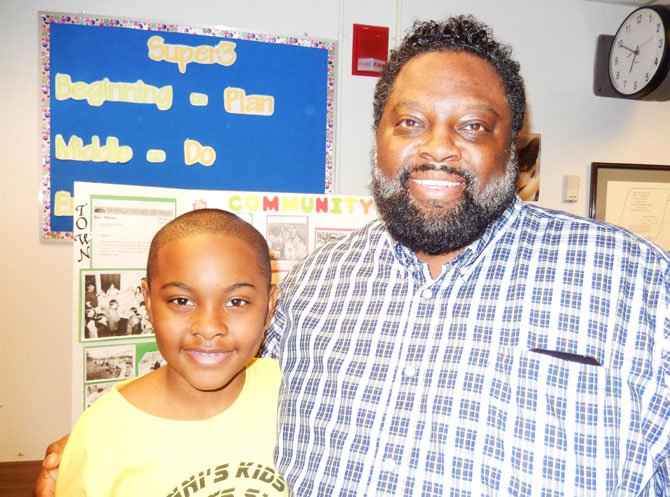 By By Bonnie Hobbs 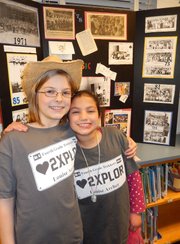 A section of the quilt squares made by each student. 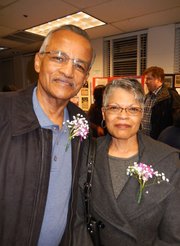 One of the school’s displays in the library “museum.”

Past and present came full circle last week when alumni joined current students, their parents and teachers to celebrate Louise Archer Elementary’s 75th anniversary. Sixth-graders proudly gave visitors tours of this historic school, while attendees looked at old class photos and other mementos in a museum in the library.

Vienna’s Phillip Williams, 43, said every generation of his family has gone to Archer since it opened, and his son Justin is in fifth grade there now. Perusing the library displays during an open house, Friday evening, March 7, brought back fond memories to him.

“It’s a great school,” said Williams. “What I remember most is that the kids I went to school with here are the kids I graduated high school with. We formed those bonds of friendship here at Archer.”

He found a photo of himself in the sixth grade on one of the displays and said the anniversary celebration was special. “I was tempted to move away,” he said. “But I have four kids and I wanted them to attend this school because of the foundation it’s always provided for kids. Back then, the neighborhood was African-American, but now most have moved away because of taxes and the high cost of living. But for me, this is home.”

GUEST SPEAKER was Archer alumnus Mark Merrell, now principal at Madison High. “He told stories about what it was like to go here when he was a child,” said fourth-grade teacher Lauren Wagner. “His dad was the first white PTA president here.”

Wagner and special-ed teacher Kris Beurmann co-chaired the anniversary celebration, along with the PTA, and were pleased with its success. “Some of Louise Archer’s actual students – women in their 60s – came to the assembly,” said Wagner. “And they were so touched to see her honored this way. When they were here, the school just had three rooms, so they enjoyed taking a tour of the building.”

Beurmann said one of the women, Gloria Carter, saw her graduation photo on one of the displays and said, “That’s me.” Then, said Beurmann, “She showed it to everybody; she was so proud. It was my favorite part of the day, and it shows how this building is filled with history. The community has so many alumni and we invited everyone to come see our amazing school.”

Wagner said the current students know their school’s story (see sidebar) and like talking about it. “Louise Archer’s values of education, hard work and generosity are still practiced here today,” added Beurmann. “And we hold Louise Archer Day and celebrate her and the school every year in March.”

However, the teachers also tell today’s 750 students that their contributions are important, too. In fact, said Beurmann, “Every student decorated a fabric patch that was made into a quilt now on display in the library. They each illustrated what this school means to them.”

At the assembly, the children honored the school’s namesake by singing original songs, reading poems they wrote, doing a “Louise Archer Rap” and singing, “Lift Every Voice and Sing.” Beurmann said it’s considered “the Negro national anthem,” and Wagner said Archer, herself, sang it with her students “and it’s a tradition we want to carry on.”

DURING THE OPEN HOUSE, fifth-grader Sam Palmertree said his school’s special because “you get lots of challenges, like writing and group projects, that’ll help you in later years. So if you really work hard, you can achieve things and improve.”

His sister Katie, a third-grader, said she has “awesome teachers. They’re nice and they don’t give me a lot of homework. I liked doing a poem with my class at the assembly.”

Sixth-grader Meredith Nawrocki likes her teachers, too, and all the “fun activities” the students get to do. “Everybody’s so nice to each other,” added fourth-grader J.T. Landwehr. “And the teachers teach things that you might need in life.”

Archer parent Patricia Solano said, “I love the school and its creative approaches to interest the students in what they’re teaching. They’re exposed to current topics, and they get to choose, design and develop projects from beginning to end.”

Her daughter, Havana, says Archer’s teachers are “the best,” and classmate Kate Bellamy likes “having good friends like Havana and lots of people who help out and support the school.”

Also enjoying the open house was Vienna’s Joe Ellis, perusing old class photos as memories came flooding back to him. “I came here in ’46 to first grade,” he said. “The school’s so much bigger now than it was then, but the cafeteria and stage look the same.”

When he was a student, said Ellis, “We all did custodial-type work together and cleaned up our own messes. And sometimes, two grades were in one room. I could walk to school from my house, and I used to be a safety patrol on the corner of Nutley and Orchard streets. This is the first time I’ve been here in years. I think this celebration is great, and I’m glad they changed the name of the school in Louise Archer’s honor.”