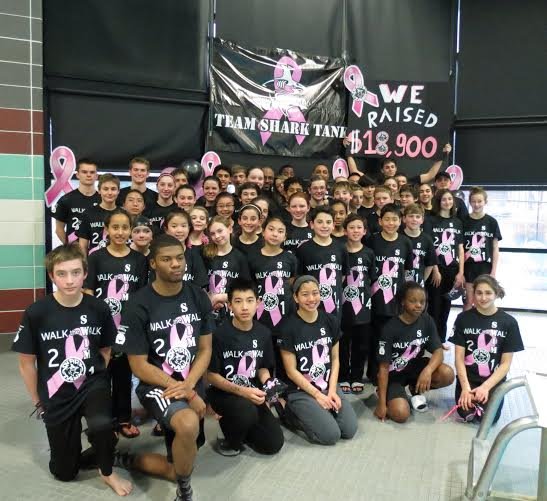 The Shark Tank Racing Squad raised $18,900 for breast cancer research at their marathon on March 2. Photos Courtesy of Patty Friedman

Patty Friedman, a coach and co-founder of the Shark Tank Racing Squad, shared some alarming statistics at the beginning of the team’s breast cancer marathon on March 2 at the South Run Rec Center in Springfield. 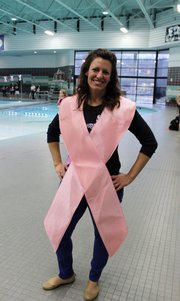 Michelle Bowden of Burke dressed up as a pink ribbon to raise breast cancer awareness at the Shark Tank Racing Squad’s breast cancer marathon on March 2.

Friedman shares the statistics with the team members to remind them why they are swimming.

For the fourth year in a row, the Shark Tank Racing Squad has participated in a breast cancer marathon to raise money for breast cancer research. Participants, from 9-year-old team members to a 23-year-old coach, swim between 110 and 120 laps.

“It exhilarating and symbolic,” Friedman said.

The money is donated to the two-day, 39-mile walk Avon Walk for Breast Cancer, which Friedman will be walking in for the seventh time this spring in Washington, D.C. Members of the Shark Tank Racing Squad join Friedman for the opening ceremonies of the walk, and also cheer her on along the route.

Friedman decided that she wanted to participate in the Avon Walk ever since traveling to Washington, D.C. when she was trying to start a family. She saw the walk going on and decided she wanted to become part of it, after starting her family. What she didn’t realize was that her future close friend was participating in that walk.

“My friend lost her mother of inflammatory breast cancer, which is not really diagnosed often,” Friedman said.

This year, the squad raised $18,900 and reached over a million meters of swimming for charity.

According to Coach Lance Page, the Shark Team Racing Squad is for motivated, exceptional swimmers.

“The swimmers have to try out,” Page said. “There are also seven coaches for 45 kids, which is a good coach to swimmer ratio.”

Coach Erik Elam said he is very proud of the squad’s efforts.

“They really do a lot to help the community,” Elam said.

The squad has been nominated for the upcoming Volunteer Fairfax Awards, and has participated in events such as Our Daily Bread’s Empty Bowls Fundraiser.

Since the squad began participating in the breast cancer marathon, they have raised over $52,000.

Friedman, who has been walking 8 to 10 miles a day in preparation for the May 3-4 Avon Walk, said she is constantly impressed by the squad. Coach Page also shares the same feelings.

“We really are one big family,” he said.