Includes no increase in property-tax rate. 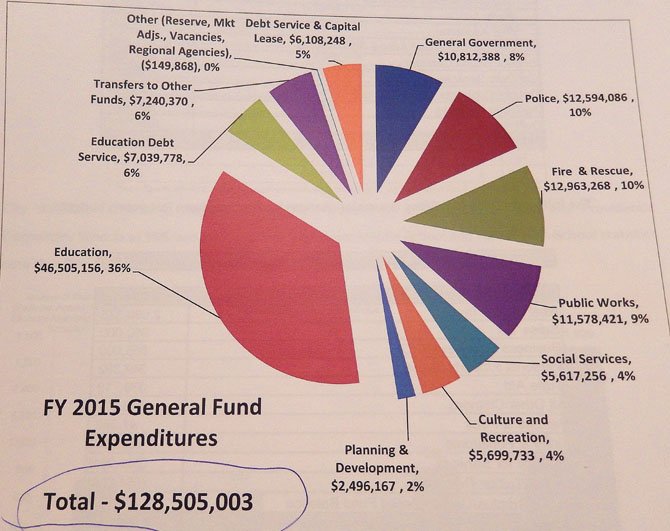 The City of Fairfax is on firm financial footing and the real-estate tax rate is not proposed to increase in the coming fiscal year. That was the message City Manager Bob Sisson brought to the City Council last Tuesday, Feb. 25, when he unveiled his proposed FY 2015 budget.

City residents may weigh in on the proposed budget at the following City Council meetings at 7 p.m. at City Hall:

"The regional economy is getting stronger," said Sisson. "Real-estate assessments are up 3.3 percent overall, 4.5 percent for residential property, alone. And there’s only about a $400,000 or so school increase."

He said the loss of the water system "created a bit of a void in our budget this year." However, he said the City will have lower debt-service payments in FY 15. Noting that, "over the past few years we’ve trimmed city staff," Sisson said he’d now like some of those positions restored.

WITHIN THE BALANCED BUDGET, he said, are real value and "unsurpassed services" to Fairfax residents, including trash collection provided in the City real-estate tax rate. And he was proud that Fairfax has continued to maintain its AAA bond rating.

Regarding annual budget challenges, Sisson said school tuition is the largest, single expenditure. However, he added, "A few years ago, we established a reserve fund in case we needed it for our education-contract partner, Fairfax County Public Schools. It’s roughly $560,000."

Some 53 percent of the total General Fund budget is non-discretionary, meaning beyond the power of the City Council to cut, so additional capital funding is needed. Even if no employees received pay increases, he said, "It now costs $7 million a year for employee pension payments – and it’ll keep going up every year."

Although Fairfax’s residential real-estate tax is expected to remain flat at $1.06 per $100 assessed valuation, homeowners’ tax bills will still rise because their property has generally seen a 4.5-percent jump in assessed value over last year. That means someone owning a home valued at $300,000 last year will pay an extra $143 in property taxes this year because that home is now worth $313,500.

THE TOTAL VALUE of the City’s real-estate tax base is now $5.52 billion, which Sisson called a "healthy increase" over calendar year 2005, which was $4.4 billion. And, he added, "We have a fairly well-diversified list of revenue sources, not just real-estate tax."

For example, the BPOL (business/professional/occupational licenses) tax is projected to bring in more than $9 million in FY 15, and the meals tax, nearly $6 million.

The increase in General Fund spending includes a recommended 3.5-percent merit pay hike for City employees totaling $375,000. Sisson also recommends spending $55,000 to restore home delivery of the informative Fairfax newsletter, Cityscene. But these items and others are offset by an across-the-board increase from FY 14 in various taxes and fees the City will receive.

After hearing Sisson’s presentation, Councilman Dan Drummond said, "Great job by the [City] staff, and we look forward to the community’s involvement." Mayor Scott Silverthorne was pleased that Fairfax’s real-estate tax rate is "significantly lower than other jurisdictions."

"This is the first time we haven’t had an increase in the tax-rate proposed," said Councilman Steven Stombres. "But since assessments are up, I’d like to see if we can help people keep more of their hard-earned money."

"Since 48 percent of our revenue is coming from real estate – both residential and commercial – the redevelopment of commercial real estate is the way to increase our revenue in the future," said Councilman David Meyer. "Because of the sale of our water system to Fairfax County, we’re avoiding long-term increased costs of the water system – which is like a tax rebate for the citizens."