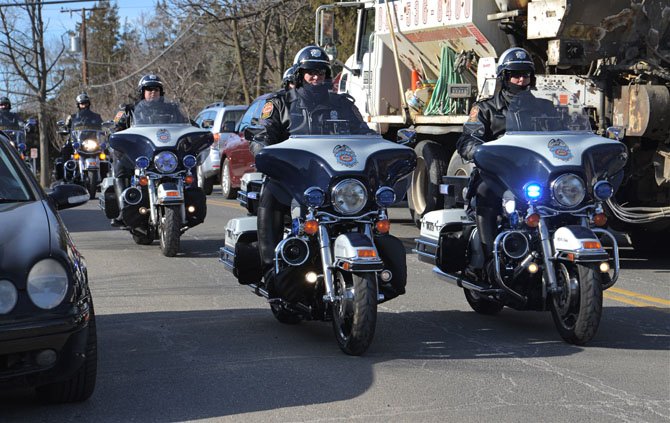 "A life defined by faith, family and friends," was how Senior Pastor the Rev. Dr. Peter James of the Vienna Presbyterian Church (VPC) described long-time Vienna Mayor M. Jane Seeman at the services to honor her life and memorialize her passing. With an estimated 600 in attendance, by thirty minutes prior to the start of the 2 p.m. service on Friday afternoon, Feb. 28, the lower level of the VPC Chapel at 124 Park St. NE in Vienna was already full and those still arriving began filling in the upper galleries. The state flag was ordered at half-mast in the state capital on Friday, as well as at public buildings in Vienna, Fairfax City and around the county. Vienna Town offices closed at 1 p.m. to allow staff to attend and offer their personal farewells to the much-loved mayor.

Seeman, who succumbed to lung cancer on Feb. 23 at the age of 76, was a resident of Vienna since 1968. Her political career began with her appointment to the Vienna Town Council in late 1996, to fill the seat left vacant by the death of her husband, Rodger. After winning two full terms to the Council, Seeman was elected Mayor in 2000, and was still fulfilling her duties just days before her passing.

A "LIFE CELEBRATION" for "Mayor Jane" (as she was known to so many) was held at Money and King Funeral Home in Vienna on Thursday. The online condolence book on the Money and King website is filled with the tributes, remembrances and condolences of friends and colleagues from Vienna and around the country, recalling Seeman’s devotion as a friend and to the town. The writings posted there and on other media sites demonstrate Seeman’s interest and willingness to participate in dozens of community organizations and events and charitable activities. The Town of Vienna Public Information Office posted Vice Mayor Carey Sienicki’s tribute with the announcement of the Seeman’s death. "Mayor Seeman has left us all with the legacy of how to be a model citizen through her leadership, education and service to the community with a caring compassion to others…Jane has left this world a better place and we are privileged to have known such a wonderful person…"

While there were certainly a large number of colleagues and political figures at the Church service, including rows of Council members and staff, representatives from the Fairfax County Fire and Rescue Departments, Congressman Gerry Connolly (D-11), and Fairfax County Board Supervisor Cathy Hudgins (D-Hunter Mill) among them, the emphasis of the memorial was on Seeman as mother, grandmother, and friend. "This is not a political funeral," declared Pastor James. "This is a celebration of an amazing life."

James offered a brief biography, speaking of Seeman’s roots in Kansas, where "she was a rabid Kansas University Jayhawks fan – and, I’m sure still is!" Seeman met her future husband Rodger while both were studying Business and Economics at Fort Hays State College. "Actually, I should say where Jane was tutoring Rodger in Economics," the Pastor said laughingly. When the family arrived in Vienna, Seeman immediately dove into the community as a preschool teacher, a volunteer at the Patrick Henry Library, and a Neighborhood Watch member, to name just a few of the activities and events in which she participated or helmed. "And she served tirelessly here at Vienna Presbyterian Church," added James. "The Seemans joined VPC in October of 1968. Jane was an usher, a coffee server; she delivered meals on wheels and so much more. I told you, hers was a life of faith, family and friends." And it was her family who then paid tribute through song, prayer and personal remembrances.

"My mother was, and still is my best friend," said Linda Colbert. "And I learned that I always had to share her with everyone. She was everyone’s friend – including all of my friends when I was growing up. She was just genuinely interested in people." Colbert spoke of her mother’s love for the library and her work as a volunteer there. "She put in some 3000 hours there," she said. "So many people had no idea that it was the mayor reading to their kids or helping them find something. She had no need to be recognized, just to help."

Son Bill Seeman continued painting a picture of a mother supportive of her children at all times - "Even when I brought home ‘pets’ that I found out really creeped her out!" – and of a grandmother who created memorable adventures for each of her grandchildren. "The trips we went on and the ones she arranged and took us on were incredible, but the best part was always being together as a family and the way she made each of us feel."

"She’s gone too soon. She had so much more to do," said Bill Seeman, "but, I guess when I think about it, she lived ten normal people’s lives in her one life.

Following the service, a motorcycle cavalcade escorted "Mayor Jane" to Flint Hill Cemetery in Oakton. The family then returned to Vienna Presbyterian Church for a reception and to continue sharing their stories and celebrating the life of Mayor Jane Seeman.