Hundreds turned out to learn how maple syrup is made. 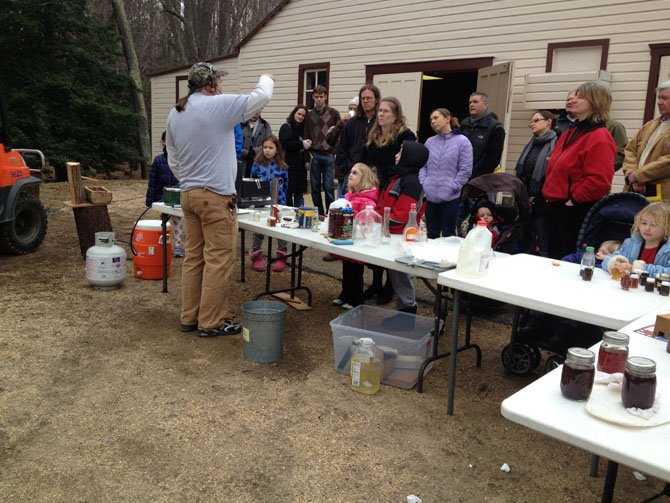 How much sap does it take to make maple syrup? For Colvin Run Mill Park’s miller Mason Maddox, the average answer is about 60 gallons.

"Typically my last program is always the first weekend of March. That’s when they start up North, but it’s ending here in Virginia because the weather has been too warm," said Maddox, who has served as a miller at Colvin Run for over 15 years.

Visitors flocked to the park in Great Falls during February and March to learn about the history of maple syrup and how it is made. The final session was held on Sunday, March 2. 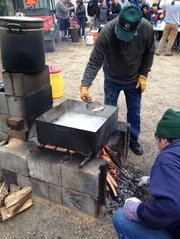 Volunteer Tom Milton tends to the boiling syrup over the fire pit.

Maddox explained the process of maple sugaring to the crowds, from tapping trees by boring short holes into the outer layers of bark to letting the sap funnel into hanging buckets underneath. Most importantly, he and his team demonstrated the process of boiling the sap down to syrup over a fire. Since maple sap is about 97 percent water, it can take hours to boil away the moisture to obtain the final product.

According to Maddox, American Indians discovered maple syrup first. While there are many theories as to how, he believes they saw the trees oozing during the winter and discovered the sweet substance from observing its attraction to insects and other creatures.

Other volunteers nearby showed guests the boiling process up close. Standing over a churning vat of boiling sap above a cement block fire pit, volunteer Tom Milton theorized that it was the fire that brought many of the families out during the park’s three Sunday afternoon sessions.

"I like the activity associated with the fire and the boil and being outdoors, it’s nice," said Milton while removing impurities from the boiling pot. Milton lives across the street and has volunteered at all of the park’s seasonal events since retiring five years ago.

In the barn next door, staff gave out samples of syrup with cornbread, much to the children’s delight.

"It’s great this is going on. It’s educational for the kids, and if the weather is good it’s great for them to get out and learn something right here in our backyard," said Andrea Dahl, visiting with her family from Vienna. "The only time I’ve ever seen this before was in New Hampshire. To have it in our backyard is phenomenal."

After his demonstration, Maddox agreed that, amongst all of the park’s visitors, ultimately it is usually the children who enjoy learning about maple syrup most.

"It’s just a great program, and as you can see, it’s for the kids. I love being able to teach the kids how they get some of their products from the mill."