Go forth and make a difference. 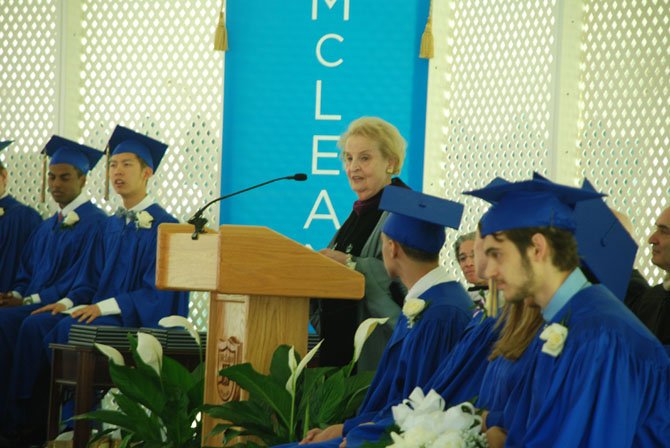 Madeline Albright speaks to the McLean School Class of 2014. Photo by Susan Belford.

Most graduation speakers are faced with the problem of emitting wisdom and life-lessons for the graduates who are leaving one phase in life and venturing on into their next act. Instead of speaking to the graduates about success and fortitude, McLean School Commencement Speaker Madeline Albright, Secretary of State under President Clinton, had students complete a survey, and she used the results and their views to formulate her speech.

The McLean School graduation took place on June 6 in a white tent erected on the grounds of the school. Parents and family of seniors enjoyed a beautiful spring day as the 20 graduates paraded to the sounds of “Pomp and Circumstance.” Valedictorian John "Jack" Watson shared the stage, as well as the podium, with his famous grandmother, Madeline Albright.

Albright was appointed as the first female Secretary of State and the highest ranking woman in the history of the U.S. government in 1997. During her tenure, she reinforced the U.S.'s alliances; advocated democracy and human rights; and promoted American trade and business, labor and environmental standards abroad. In 2001, she received the U.S. Sen. John Heinz Award for greatest public service by an elected or appointed official. After she left her post as Secretary of State, she founded The Albright Group, an international strategy consulting firm. She currently serves on the Council of Foreign Relations and on the International Advisory Committee of the Brookings Doha Center. She is the Mortara Distinguished Professor of Diplomacy at the Georgetown University Walsh School of Foreign Service in Washington, D.C. and honorary chair for the World Justice Project.

Albright spoke to the graduates about the importance of self-respect and being happy — and the fact that many commented that “they are leaving McLean with the certainty that they can do or become anything they want — the world is wide open to them.” In the survey, every student said that he or she is going to college, all want to study abroad and all feel well-prepared for the rigors of college. Some of the colleges that the graduates will attend are: University of Wisconsin, Madison, Ohio Wesleyan University, Berklee College of Music, Union College, St. Mary’s College of Maryland, High Point University, Duke University, George Mason University, Denison University and Rochester Institute of Technology. The class received an excess of $1.3 million in merit scholarships.

Speaking to the graduates, Albright said, "One of the most consistent answers to my questionnaire was about 'What you learned at McLean?’ You responded, 'Self Advocacy', which I understood to mean that you learned how to be yourself, how to find your strength, and how to be a strong individual. I believe that is an incredible gift. You also commented that your favorite part of McLean were the teachers who cared so much about you — and gave you invaluable guidance.

“At the beginning of my remarks, I was willing to admit that adults don't have all the answers,” she said. “In fact we have screwed up a lot. We are counting on you [McLean School graduates] to make sense of a confusing world and help solve some of the problems that we have created. You will be able to face the future with confidence because the skills and values you developed at McLean will go along with you."

She commented on how she was born “before the invention of the iPad and shortly after the discovery of fire. Most of you will have greater involvement in the global world than former generations because of the wonders of technology and modern communication devices. You understand the value of learning foreign languages and studying abroad. You are looking at your future with optimism — because you know you are prepared for college and careers.”

Her final piece of wisdom was to “Believe in yourselves and make the world a better place. Live each day with the knowledge that whatever you do will count — and will make a difference.”