Final recommendation will be presented to School Board in July. 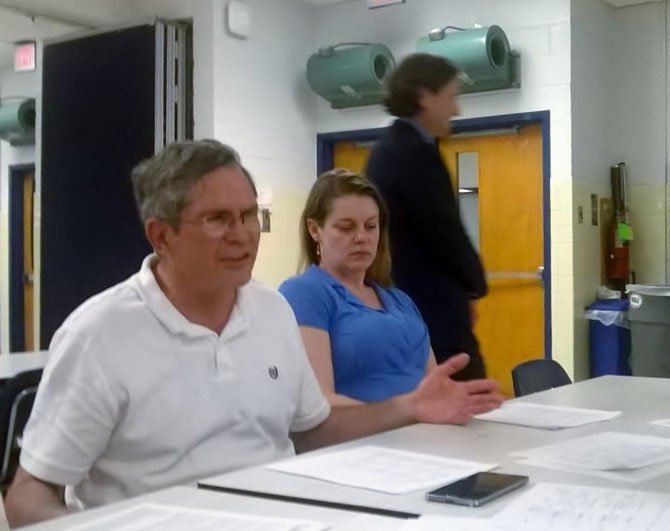 Springfield citizens voice their concerns regarding the proposals for later start times at a public meeting at West Springfield High School on June 10. Photo by Janelle Germanos.

Parents and community members were presented with information regarding later start times in Fairfax County at a public meeting on June 10 at West Springfield High School.

Leading the presentation were Danny Lewin and Judith Owens, doctors from the Children’s National Medical Center and experts on sleep medicine.

While many parents agreed that start times need to be changed, there was continuing discussion as to which of the four options would work best for the school system and the students.

Mark Eackloff, who began advocating for later start times in Fairfax County 19 years ago, said he prefers option one but thinks that any option would be beneficial.

Eackloff joined other community members in one of several small groups set up to facilitate discussion about the options.

Lewin said that an ideal start time would be anything after 8:30. His presentation included facts about the state of sleep in Fairfax County.

Another reason to have later start times, Hutcherson said, is the issue of drowsy driving. According to Lewin’s presentation, drivers between the ages16 to 25 are involved in over half of 100,000 traffic accidents related to fatigue.

“If we have later start times, high school students will be well-rested and able to drive. Starting earlier wouldn’t affect elementary school students since they aren’t driving themselves,” Hutcherson said.

BUT SOME PARENTS were concerned that later start times that lead to later release times would impact extracurricular activities and sports. Many have also said that pushing back start times would cause students to stay up later.

Hutcherson, however, said that being less exhausted would allow students to be more efficient when doing homework.

“It all comes down to parenting,” Hutcherson said. “But later start times means less exhaustion. If you start off your day exhausted, you’ll continue to be exhausted.”

Lewin said that the final option will most likely be a hybrid of those presented, but said that each of the options would work.

In the small group with other community members, Eackloff showed his eagerness to get this done.

“No matter which option, the students will benefit,” he said.