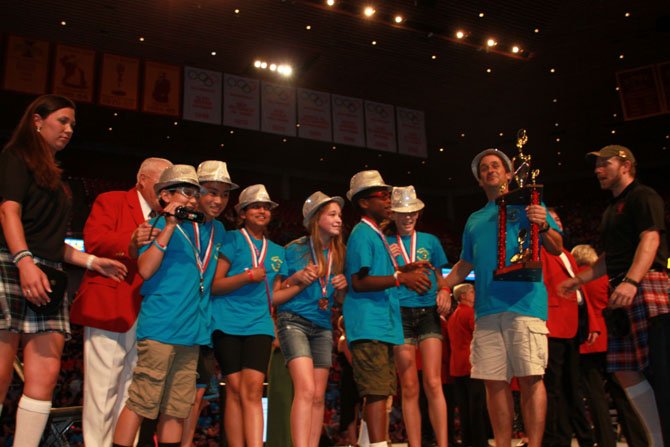 Odyssey of the Mind competitions require teams to present creative and dramatic solutions to a variety of STEM-related problems. Teams advancing through regional and then state competitions proceed to the World Finals. The World Finals this year included more than 800 teams from countries around the world, such as China, South Korea, Germany, Switzerland, Hungary, Hong Kong, Singapore, India, and Poland.

The seventh grade Nysmith team, the "Know Brainers," were making their third consecutive trip to the World Finals. The team includes seventh graders Ilina Gobburu, Maxwell Jones, Bryce Nabulsi, Chris Nguyen, Landon Poon, and Anika Schipma. Presenting their solution to the technical problem titled "The Not So Haunted House," the team solved the mystery of who stole the Pink Panther diamond from the Louvre gem exhibit. Their creatively-engineered special effects and surprise ending “stole” the show.

The team also took first place in the world with their creative solution to the "spontaneous" engineering problem, besting the efforts of 67 other teams in their division from around the world.

The team coach is Marwan Nabulsi.

Nysmith is located in Herndon. The team members are from Oakton, Great Falls, Oak Hill, Herndon, Chantilly and Rockville.