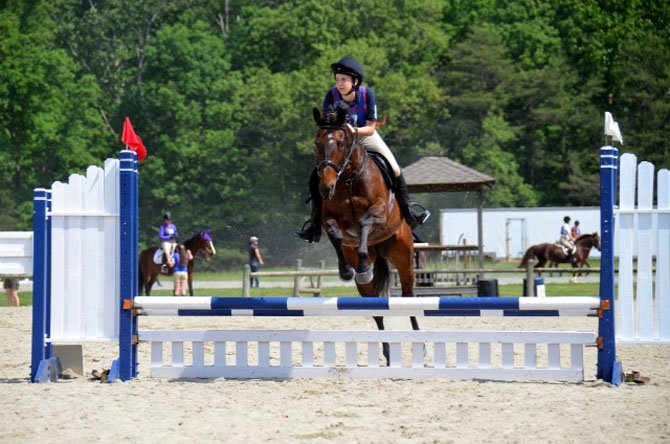 Cassie Picard and her pony jumping over a hurdle during a jumping rally in Richmond. Photo contributed

Vienna teenager Cassie Picard spends a lot of time horsing around – but that’s because she rides ponies in competition. She rides at Hunters Valley Riding Club in Oakton and competes with Old Dominion Hounds Pony Club.

In a regional dressage event, May 24-25, her team came in second overall. During dressage, horses perform complex maneuvers in response to subtle body signals from their riders. And Cassie – a 14-year-old eighth-grader at Thoreau Middle School – had the highest personal riding score of more than 40 riders.

But she was even more excited about her team’s finish. “I was very proud of our placement,” she said. “Our team had the highest ride score all of the teams, which is excellent.” 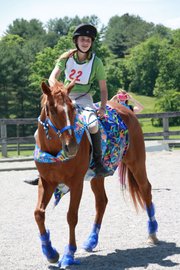 A FEW WEEKS EARLIER, Cassie and her team placed third out of 25 teams at the Virginia Regional Pony Club Rally, May 10-11, at the Deep Run Hunt Club in Manakin-Sabot, outside Richmond. She’s been riding since age 7, but didn’t join Pony Club until last fall, so this was her first rally (tournament).

Rallies are different than horse shows in that the riders compete together in teams of five and the combined scores determine the winning team. “I was very nervous,” said Cassie. But she didn’t let it affect her performance. Personal scores are also given and, in the Richmond rally – which was a jumping event – Cassie received the highest score for equitation (riding technique) for her team.

Then came the dressage event, May 24-25, at Morven Park in Leesburg, and another outstanding day for Cassie and her teammates. She rode a horse named Mocha in both rallies, but he belongs to someone else. But on May 31, she became a horse-owner, too, when her parents surprised her with a 10-year-old thoroughbred named Celtic Charm, purchased from a friend of a friend.

“It was awesome,” said her mom, Lisa Picard. “Her barn friends were all in on the surprise, and they kept her busy by having her judge at a show for some younger kids. We walked [the horse] up to her in front of everyone, and she was stunned. And it turns out, you can gift-wrap a horse. Celtic Charm is 16.2 hands tall, 1,300 pounds and is a retired racehorse.”

“I still can’t believe it’s real,” said a thrilled Cassie. “I’ve been waiting and hoping all my life for this day! It’s a dream come true.”

So why does she enjoy horseback riding so much? “I love riding horses because it feels like flying,” she explained. “And I get to spend time with friends who feel the same way about horses as I do. Competing in the summer events, especially cross-country jumping, is my favorite part.”

Toughest, said Cassie, is “having the proper balance. Everyone thinks you just sit there whil

Cassie and pony, Mocha, won a second-place ribbon in a regional dressage event.

e the horse does everything, but that’s not true. The challenge is to make it look easy. There’s a lot of communication and trust required between rider and horse.” Best of all, she said, is “being able to connect with an animal that’s 10 times your size, but is still your best friend.”

NEXT ON CASSIE’S AGENDA is reaching the next level certification in Pony Club, which will require “a lot of work and study,” she said. “I’m preparing for our next rally at the end of June and I also want to start practicing musical, freestyle dressage. Next year I hope to qualify for the Pony Club National Championships in Kentucky.”

Currently, she rides every moment she can. “During the school year, it’s usually about 15 hours a week,” she said. “I'm looking forward to summer when I can ride all the time.”