Lord and Lady Fairfax Honorees of Lee, Springfield and Braddock

Lords and Ladies of Fairfax Honored by Board of Supervisors 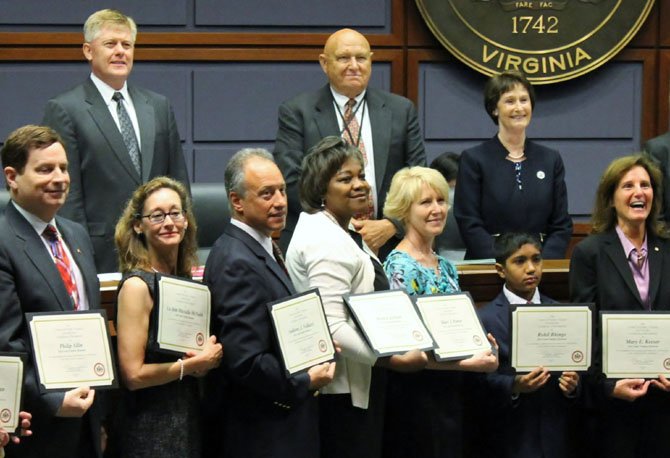 Anthony Vellucci and Monica Jackson (third and fourth from left) are this year’s Lord and Lady Fairfax for the Braddock District. Photo by Janelle Germanos.

The 2014 Lords and Ladies of Fairfax were recognized in front of the Board of Supervisors on June 3 and presented with certificates honoring them for their dedication to their communities. This tradition, which began in 1984, comes every year with the Celebrate Fairfax Festival, which takes place this year June 6-8.

George Towery and Tawny Hammond are this year’s Lord and Lady Fairfax of the Lee District. George Towery served as principal of Cameron Elementary School for 30 years and retired three years ago. He stays involved in the community as a member of the Springfield Civic Association, specifically through National Night Out, and volunteers at T.C. Williams High School and Cameron Elementary.

Tawny Hammond, the director of the Fairfax County Animal Shelter, was president of the Springfield Civic Association for ten years and chaired the Springfield Days Committee. She gives back to the community and worked to increase inclusiveness in Springfield by making civic association meetings more accessible to immigrants and persons with disabilities.

Lords and Ladies of Lee, Springfield and Braddock 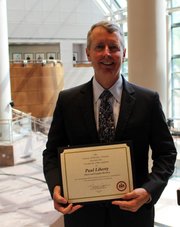 The 2014 Lords and Ladies of Fairfax were recognized in front of the Board of Supervisors on June 3 and presented with certificates honoring them for their dedication to their communities.

Paul Liberty is this year’s Lord Fairfax for the Springfield District. He lives in Cardinal Forest in West Springfield, only a couple streets over from where he grew up. Liberty was active in SOAR (Spartans Organized for Action and Renovation), which advocated for renovations to West Springfield High School. He has also been a leader in Fairfax County Citizen’s Budget Review Committee, Fairfax County Chamber of Commerce, South Fairfax Regional Business Resource Partnership, the American Heart Association, Virginia Public Access Project, the Northern Virginia Technology Council and Celebrate Fairfax.

“I am humbled and honored to receive this recognition,” Liberty said.

Karen Brown is this year’s Lady Fairfax nominee for the Springfield District. Brown founded Kristi’s Christmas after her daughter Kristi was killed in a car accident on the beltway. The organization provides clothing and more to needy children in Fairfax County.

Anthony Vellucci and Monica Jackson are this year’s Lord and Lady Fairfax for the Braddock District.

Monica Jackson operates Jackson Child Care, and worked with the Fairfax County Board of Supervisors on the zoning ordinance to foster safe child care environments in the county. She also services as Vice Chairman of the Fairfax Child Care Advisory Council and was formerly president of the Virginia Alliance of Family Child Care Associations.

Anthony Vellucci serves as the Braddock District Representative to the Park Authority Board and worked to renovate the non-existent Kings West Swim Club into a park, now called Rabbit Branch Park. He also served as president of the Kings Park Civic Association and works with Kings Park West Road Raiders to beautify the neighborhood. He is also president of Friends of Lake Accotink Park.