Commonly known for their playfulness and pungence, ferrets have earned themselves the moniker of “the clowns of the animal kingdom” from sources like Animal Planet. City of Fairfax resident Brandon Henry, 13, of Robinson Secondary has greatly enjoyed this aspect of his two ferrets, Steve and Skippy, for the past two years. 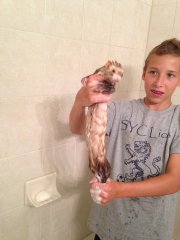 Brandon holds up one of his ferrets after giving it a bath. Henry said, despite popular belief, the ferrets do not smell all that bad, so long as they are bathed regularly.

“I asked for them two years ago for Christmas, and ended up receiving them as a gift from my parents,” Henry said. “At the time, my sister always called random things ‘Steve,’ so I decided to name one of the ferrets ‘Steve,’ and the other one was always hopping around, so I named it ‘Skippy.’”

Henry said his expectation prior to receiving the ferrets that they would be difficult to raise was proven wrong.

“I expected raising them would be a lot harder than it actually is,” Henry said. “Taking care of the ferrets is also a lot more fun than I originally thought. I enjoy having them because they’re not exactly like a normal pet; they’re not like cats or dogs. The way they walk, the noises they make, the way they play. . .it’s just really funny any cool.”

Henry said his favorite thing about taking care of two ferrets was how funny they are as household companions.

“They always hop around, making funny noises, and run away with stolen socks, although I don’t know where they’re taking them or why,” Henry said. “You can take them out of their cage and sit in a room with them, or let them explore the whole house, just so long as they don’t go anywhere they’re not supposed to or chew on furniture and cords.”

Henry said he must keep an eye on his ferrets, or else their funniness might lead to them getting lost.

“One of them escaped outside into the yard once, and later, the same one got into an air vent,” Henry said. “We had to make clicking noises, like the way you would attract a cat, to get him back to us.”

Henry said, oftentimes, when he tells friends he owns Steve and Skippy, his friends think his pets are weird at first, but later come to understand them as unique, interesting creatures.

“When I tell people at school that I have ferrets, a lot of the time, they’ll say it’s weird,” Henry said. “They’re a different sort of pet, but it’s fun owning a different sort of pet. When my friends meet Steve and Skippy, they usually change their minds and enjoy playing with them. They learn that they’re pretty cool animals, they don’t really smell so long as you bathe them and clean their cage, and they’re really slinky-like as well.”

Henry said he used to own a special ferret leash that he could attach to one of his ferrets’ small collars to walk them like a dog.

“We used to walk the ferrets before we lost their leash; they enjoyed going outside and seeing all of the new stuff,” Henry said. “Walking a ferret is much different from walking a dog because you can’t tell a ferret to ‘come’ or anything like that. You have to tug on them so they know where to move, but you have to be more gentle with them as well because it’s a smaller creature.”

Henry said his experiences with Steve and Skippy at a young age increase the likelihood of him experimenting with other unorthodox pets in the future.

“I think I see myself getting more ferrets later on because of how much I enjoy my two ferrets right now,” Henry said. “They have made me more interested in looking into weirder pets as well, because they’ve shown me that they can be just as entertaining to keep as regular ones.”