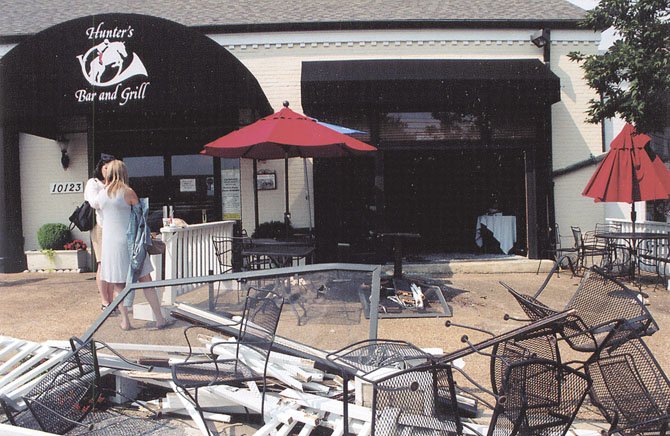 Guests were seated in what was once a fenced-­in patio at Hunter’s Bar and Grill prior to a driver failing to stop her car, jumping the curb, and entering the Polo Room. Two guests were injured. One of the tables not crushed can be seen inside the Polo Room. 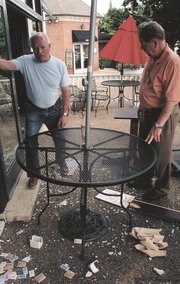 Fred Berman, (left) and his brother, Murray, look at the remains of their Hunter’s Bar and Grill patio, following the July 12 auto crash into their Potomac restaurant.

Has Hunter’s Bar and Grill, long a favorite Potomac dining establishment, become a drive-thru restaurant? For the second time in four months a car driven by a customer has jumped the curb and crashed inside the building.

“I was at the bar having a cheeseburger,” co-­owner Murray Berman said. “I thought the ceiling was falling in. The whole place was shaking.”

On July 12, a lunchtime crowd had gathered for traditional Saturday, half-­price burgers, when a Honda Civic automobile driven by an 80-year-old woman jumped the curb. It continued on to wipe out the fencing and flower boxes, smashing up tables, chairs and umbrellas on the patio before crashing through the glass front on the right side of the restaurant. After sending shards of glass in all directions, the car with its two occupants came to a screeching halt inside the Polo Room, up against a heavy wooden wall.

After making sure the Bethesda couple was not injured, Murray said he was able to talk with her. “She said the car just kept going even though she tried to stop it.” He estimated, at the time, there were about 60 people in the restaurant, located at 10123 River Road, adjacent to Mitch & Bill’s Exxon.

Although the driver and her husband were not injured, two cyclists were. They were among a group who had stopped for lunch. “There were no life-threatening injuries,” Capt. Paul Starks of the Montgomery County Police said. Both cyclists were transported to Suburban Hospital, one with glass in a leg, the other had glass in a hand. “It was very fortunate no one was seriously injured,” Starks said.

Arriving soon after the crash, Fred Berman, Murray’s brother and co-­partner of the restaurant they have owned for nearly 12 years, said the couple are regular customers. After the crash, she ironically told Fred Berman that when she drove up “she had been pleased to have found a parking spot out front.”

Fred Berman also mentioned that following the March crash into the barroom side of the restaurant, adjacent to the Polo Room, he and his brother requested a guard railing of some sort to be installed in front of Hunter‘s Bar and Grill. “They need barriers to prevent automobiles coming through our windows and injuring our customers. It’s about time. It was agreed upon with the owners of the shopping center, but they would not do it until August,” Fred Berman said.

“I can’t believe this has happened again. Three times,” said Cathy Kate, manager of Hunter’s Bar and Grill. It had previously happened once when she was with the former owner of the restaurant. “That was on a Saturday also,” she recalled. “I’ll never get used to this. I just hope there is not another accident before we get some protection.”

She was stationed behind the bar on this occasion and recalled, “It sounded like a train coming through.”

By 6 p.m. a professional clean­up crew had scooped up buckets of broken glass and vacuumed the carpeting, although skid marks and a small hole could still be seen. A few tables that were still in one piece had been set with linens and cutlery ready for dinner in the Polo Room.

A large temporary board replaced the glass window. The regular staff, including Mario, Daniel, Janine, Edgar, Peiris and numerous others, all of whom have become good friends with many of the customers, were ready and waiting. By 7 p.m., there was nearly a full house.

When Murray Berman was asked what he will do next for excitement he responded, “I hope I won’t have any more. It’s getting to be a regular thing here.”

Perhaps McLean Grant had the best idea when he suggested to manager Cathy Kate, “Maybe they should change the name to Hunter’s Bar and Auto Grill.”