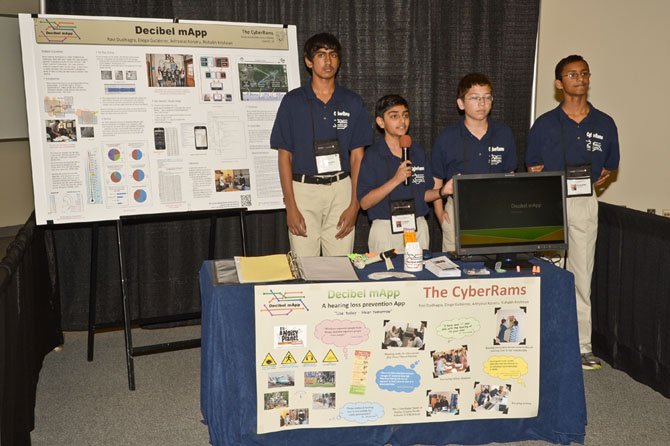 The team, named CyberRams and advised by Diego’s father Felipe Gutierrez, was one of only 20 teams in the nation that competed in the eCYBERMISSION finals the week of June 16 at the National Conference Center in Leesburg, out of more than 4,400 teams that entered.

The online collaborative learning competition, administered by the National Science Teachers Association, cultivates student interest in science, technology, engineering and math by encouraging sixth through ninth-graders to develop solutions to real-world challenges in their communities.

The team is working to address the problem of noise-induced hearing loss, an irreversible problem that is increasingly seen in young people. It created a prototype mobile computer program, Decibel mApp, which uses GPS technology to provide the user with a map showing decibel levels the user experienced at different locations during the day.

To learn more about noise-induced hearing loss, the team

The CyberRams were awarded a STEM-in-Action grant because their implementation plans were deemed to provide the greatest possible impact within their community. With the grant funding, the team intends to bring their final app to market in one year.

The CyberRams earned their place in the finals by being named Seventh Grade Virginia State Winners and Seventh Grade Regional Finalists, earning each team member $3,000 for their wins.

At the eCYBERMISSION finals week, the teams participated in such STEM challenges as designing a parachute system for a sonobuoy, like those used to find missing Malaysian Airlines plane; testing and analyzing food packaging structures that can be used for Mars missions; manufacturing items on 3-D printers; collecting and analyzing DNA; and designing a signaling device only visible with night vision goggles.

Students who would like to enter next year’s free eCYBERMISSION competition can get more information at www.ecybermission.com.