Rotary Is All Around
Votes

Rotary Is All Around

85 years of service, and counting.

“Being a Rotarian makes me feel connected to my community” and is enabling because “I can do things worthwhile that I could never do by myself.” So says Kim Durand former president of Arlington Rotary Club. In conversation, it becomes clear that Rotary’s idea of “community” is not limited to one’s own city or county, but stretches coast-to-coast and extends to other countries.

Durand points with pride to INTERACT, the youth service club in Washington-Lee High School. Support for literacy projects and student fellowships at home and abroad is among her favorite efforts. And then there are the ShelterBox Kits. When disaster strikes in the U.S. or overseas, kits designed for the time and the place are dispatched. Each holds a tent and survival equipment for 10 people. Hurricane Sandy on the East Coast and storms in Haiti and the Philippines prompted distribution of kits. Even countries that reject assistance from governments and other outside groups, such as North Korea, are open to a helping hand from Rotary.

Gary Long, Arlington Rotary’s current president, also has a list of Rotary projects close to his heart. Local blood drives and the Arlington Food Assistance Center rank highly. However, eradicating polio (infantile paralysis) is above all others. International Rotary has raised hundred of millions of dollars to vaccinate uncounted millions over decades.

Length of membership for Durant (10 years) and Long (3 years) pales before that of Hugh Barton, local public image representative: 43 years. He also has “lived” the global reach of Rotary. Barton-as-philosopher observes that “Rotary has been practicing ‘globalization’ before the term was invented.” Arriving from China on Guam as a journalist to run a radio and television station, he also found the Rotary Club. Barton has remained an active Rotarian in Virginia Beach and now Arlington. He declares himself “deeply invested in the fight against polio since 1988.” With a small smile and no little pride, he confides that the nationwide fundraiser called “Shamrock Marathon” was born of his idea in the Virginia Beach club.

Rotary’s motto is “Service Above Self.” Rotarians actively seek opportunities to provide humanitarian aid to those in need — the poor, the sick, the hungry, youths and the elderly. Arlington’s Rotary Club has been carrying out this mission for 85 years.

Partnerships with other organizations in the community are part of Arlington Rotary’s efforts “to make a difference.” The list of associates includes Arlington Free Clinic, Northern Virginia Family Services, Yorktown High School and the Salvation Army.

It would seem likely that situations would arise when the “self” had to be sacrificed to, or at the least inconvenienced by, the “service.” Durand, Long and Barton disagree, and remark that any such situation would pass without notice because of the commitment of individual members. The nearest such occasion was voiced by Durand, with a laugh.

“My very first Rotary meeting happened on my birthday. I did not want to be there. But a ‘magic moment’ arrived when I knew that I belonged, so I left smiling.” 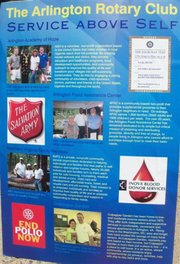