Into the Budget Fray
Votes

Into the Budget Fray 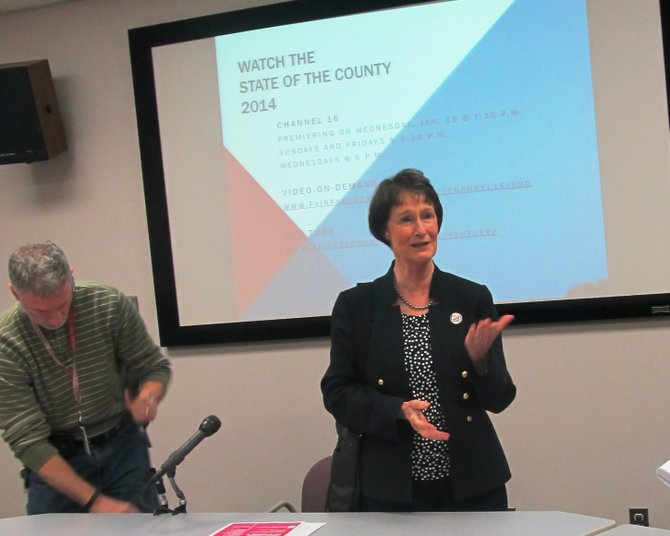 Fairfax County Board of Supervisors Chairman Sharon Bulova hosted a media screening of her annual State of the County address on Wednesday, Jan. 15. Residents can view the address on Channel 16 from 7:30 to 8 p.m., or on YouTube at http://youtube/YzeaC3K-wiY Photo by Victoria Ross.

Highlights from the 2014 State of the County Video

“Based on my 26 years of experience in the Sheriff’s Office, there are a number of initiatives that we will be pursuing in the coming year. First, it is important that the Sheriff have a strong bond with our diverse communities. I will be out in the community listening and learning and bringing the new ideas, as well as any concerns, back to the office.”

“Recently, the department has established the chief’s Council on Diversity Recruiting. This council provides the agency engagement with leaders from culturally diverse communities to assist us in developing innovative recruitment opportunities … to mirror the communities we serve.”

“Our first area of response focus is on preventing the 911 call. This is where our men and women … knock on doors and offer assistance in checking smoke alarms or checking other items that may cause fire or injury … We’ve visited over 40,000 homes since June 8 and installed over 6,000 smoke alarms .…”

Despite the lingering impact of an anemic economy, and the regional ripple effects of federal sequestration, Fairfax County residents will see some concrete signs of progress this year.

That message was delivered by Fairfax County Board of Supervisors Chairman Sharon Bulova, who cast a mostly positive light on the county’s future during a media screening of her televised annual State of the County address on Wednesday, Jan. 15.

In addition to the completion of Phase 1 of the Silver Line in Tysons, motorists can expect to see congestion eased through a number of state-funded transportation projects, including the new I-95 Express Lanes that will tie into the Beltway Express lanes at Edsall Road.

Residents can also look forward to the revitalization and redevelopment of older commercial and industrial areas throughout the county, including the $250 million transformation of Springfield Mall into the Springfield Town Center in the fall of 2014.

The newly-renovated mall will include the addition of roughly 700,000 square feet of retail, restaurants, a food court and a state-of-the-art movie theater. The 20-foot-tall brown numbers that indicated the mall’s six main entrances — a hallmark of the 1970s-era mall — will be replaced with one central grand entranceway.

Bulova also praised the Economic Development Authority and Visit Fairfax for boosting tourism and facilitating the selection of Fairfax County as the host of the 2015 World Police and Fire Games, the world’s second largest athletic competition after the summer Olympics. The event is expected to generate more than $100 million in tourism revenue for the county.

The 30-minute State of the County video, 10 minutes longer than last year’s production, highlights many county achievements in the past year — such as the county’s low crime rate and a 26 percent reduction since 2007 in the number of people counted as homeless. It also features three of the county’s new leaders: newly-elected Sheriff Stacey Kincaid, the county’s first female sheriff; Police Chief Edwin Roessler and Karen Garza, the new superintendent of Fairfax County Public Schools.

In the video, Garza said one of her top priorities is “to listen and learn what our community expects of its schools.”

“One of our big projects this year is that we enlisted the help of a broad-based community committee to develop the Portrait of a Graduate — which will detail what our community expects an FCPS student to know and be to do upon graduating from our system,” Garza said.

Garza also addressed the ongoing challenge of funding a school system with a current enrollment of 184,600 students, making FCPS larger than the school systems of eight states and the District of Columbia.

“As you know, FCPS is facing some challenges as well,” Garza said in the video. “We have grown by more than 15,000 students in the last five years and our required expenditures for items like employee benefits have continued to increase. At the same time, revenues have not increased enough to cover expenditures.”

In fiscal year 2014, 53 percent of the county’s general fund budget was transferred to Fairfax County Public Schools, a sum of roughly $1.9 billion.

School officials recently unveiled a $2.5 billion budget, asking for a 5.7 percent increase, or nearly $98 million more in county funding. Under the proposed budget, class sizes will increase at all grade levels and about 730 staff positions will be cut.

After the screening, Bulova emphasized that while education continues to be the board’s “highest priority” and the community’s “greatest investment,” there will likely be a significant gap between what school officials are asking for in their budget, and how much the board is prepared to give.

“The schools won't get everything they asked for,” Bulova said. “The school board will have to roll up their sleeves and so will supervisors.”

When asked how close the board is prepared to get to the 5.7 percent request, Bulova said that a 2 percent increase — or $33 million — is a more realistic number.

In an effort to bridge that gap, supervisors have made state education funding the county’s top legislative priority for this year’s General Assembly session.

"This is our education year, our number one ask and priority from legislators is to get the full funding of $33 million,” Bulova said.

Although Fairfax County is not facing the “doomsday budgets” of the mid-1990s, a projected budget shortfall of $25 million this fiscal year, coupled with the accelerating growth and financial needs of Fairfax County Public Schools will present the Board of Supervisors with choices and challenges.

“Once again, it will not be an easy budget year,” Bulova said. “Actions or lack of action at the federal level has impacted commercial and sales tax revenue, making it more difficult for the county to recover from the downturn.”

Bulova said the county’s advertised budget for fiscal year 2015 will be released for public comment next month. The county will host a number of public hearings, community forums and town meetings to give residents the opportunity to ask questions and make suggestions. In late April, the board officially adopts the budget.

“Every budget tells a story,” Bulova said. “We'll look for efficiencies and savings and opportunity for savings, but it won't be easy. The low-hanging fruit has already been picked.”

In spite of the challenges, Bulova said she believes the board has consistently been able to strike a balance that has kept taxes affordable while delivering high quality services to residents.

“We remain committed to work with the community to maintain excellence in the face of our challenges,” she said.