Trees still available for planting in communities along the Interstate 95 Corridor. 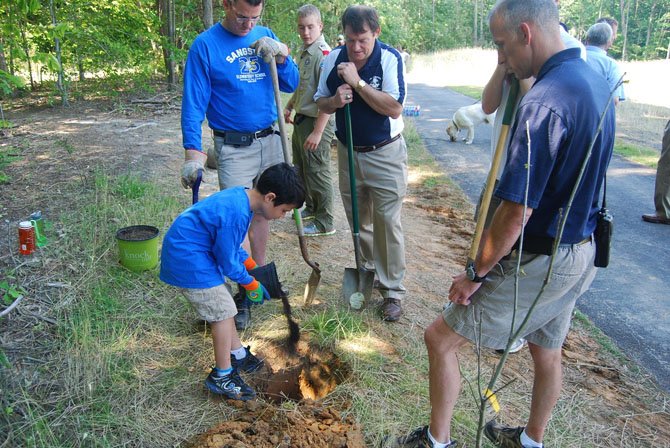 Virginia Delegate Dave Albo, Springfield Supervisor Pat Herrity and a representative from the Fairfax County Parks Authority help a volunteer from Boy Scouts from Troop 1140 at Burke Lake Park. The "1,000 Trees in 1,000 Days" program, launched by the 95 Express Lanes project private partners Transurban and Fluor in 2012, aims to restore greenery to areas that lost trees during construction of the express lanes. Photo Courtesy of 95 Express Lanes Project

In an effort to restore greenery to areas that lost trees during construction of the 95 Express Lanes project, Transurban and Fluor, private partners of the project, launched "1,000 Trees in 1,000 Days" to encourage community members to plant trees in areas along the 95 corridor.

The program began in 2012, and like the title suggests, aimed to plant 1,000 trees within 1,000 days. According to Mike McGurk, a corporate relations associate for Transurban, the project has already planted 853 trees. The program is one of two community initiatives offered to residents along the project corridor.

"The goal of the programs is to have a way to reinvest back into the communities that we will serve and the folks being impacted by construction of the 95 Express Lanes," McGurk said.

According to McGurk, the program helps put some trees back in the community that were removed to accommodate for the project. The program is not intended to replace all of the greenery removed due to construction, but is intended to put back some of what needed to be removed.

"We wanted to do a program that could put some trees back in the community and actually use the input of people and the community to tell us where they wanted the trees to go. The program is open to any sort of applicant, whether it’s a home owners association, a local religious association and even elected officials," he said.

Boy Scout and Cub Scout troops have helped put in the trees in Stafford County, as well as in Burke Lake Park. The project pays for the cost of the trees, as well as the instillation. Applicants can choose from a variety of trees that can adapt to different environments.

The program is accepting applications for the rest of the trees on a rolling basis. Community members interested in planting a tree can visit 95expresslanes.com.

"The program should wrap up by next fall’s planning season," McGurk said.

Transurban and Fluor also sponsors a community grant program, which allows organizations effected by the construction to apply for funding for a project or initiative.

"Those grants go to organizations that are impacted by the project construction. That program gives funds to implement a program of the applicants choosing," McGurk said.