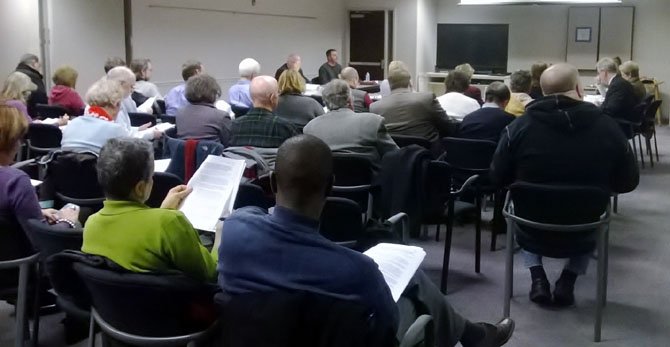 Fairfax County residents have yet to agree on the specifics of residential studio units and are continuing the debate on several aspects of the proposed amendment.

As of Jan. 6, the Planning Commission proposed amendment defines residential studios as efficiency units that make up a multiple-family residential building, or part of a building, in which 80 percent of the units must be for those who do not make more than 60 percent of the median income of the area. In the Washington, D.C. area, that is $45,000.

The Residential Studio Unit Amendment has also been amended to remove residential studio units from consideration in lower density R-E through R-8 districts, where single family detached homes are allowed.

AS IT CURRENTLY STANDS, the amendment does not allow for the conversion of single family homes. It was this issue that several members of the Board of Supervisors, including Supervisor Pat Herrity (R-Springfield), were opposed to and advised the Planning Commission RSU Committee to remove from consideration, along with removing from consideration the development of Residential Studio Units in lower-density neighborhoods.

"Some people thought someone could just go in and create a boarding house out of a single family home, so the Board asked the Planning Commission to just remove that option altogether," said Michelle Krocker, executive director of the Northern Virginia Affordable Housing Alliance.

Herrity, however, said that he is still opposed to the income limit of $45,000 for 80 percent of the units, and believes the market should dictate the rates.

"The ordinance still needs a lot of work. 80 percent of the units will be out of the reach of our policemen, firemen, teachers and other young professionals in Fairfax County because of the rent controls," Herrity said. "I think that’s still the chief problem with the ordinance."

Herrity said he has been working with state delegate Jim LeMunyon (R-67) on issues related to residential studio units.

"I’ve been working with Jim LeMunyon on a piece of legislation that would keep these RSUs out of neighborhoods and prevent single family conversions," Herrity said.

According to Krocker, residential studio units will provide those who work in positions vital to Fairfax County with an affordable place to live. Using Paycheck to Paycheck, a website that can compare the salary of different occupations in various areas, Krocker said she was able to compile a list of jobs that make anywhere from $19,000 per year to $48,000 per year, including automotive technicians, bookkeepers, childcare workers, preschool teachers, cooks, bank tellers, and others.

"Single persons who work in those occupations could be well served by housing of this type; housing that is just small and an affordable place for them to live that doesn’t have a huge amount of space that they have to pay for," Krocker said.

According to Joe Pettit, a volunteer at the Church of the Nativity in Burke, residents’ concerns of overcrowding and illegal board houses are not related to residential studio units, but many groups have linked the two.

"This is a reflection that Fairfax County lacks low-income rental housing. If we had more affordable rental housing, there would be less pressure. It wouldn’t eliminate people looking for boarding types of situations, but it would lessen it," Pettit said. "The RSUs would fill the need for many people who need low-income housing. That’s the bottom line."

"In some sense, portions of Fairfax are becoming like Arlington. People who have moved to the suburbs want to preserve the suburban atmosphere," Pettit said. "That was the type of housing they chose, and I can understand why they would want to preserve that, but it appears that more and more single individual living units are going to be needed."

SOME FAIRFAX COUNTY RESIDENTS at the Jan. 6 Residential Studio Unit Committee Meeting disagreed on who is meant to be the specific populations served by these units.

Clyde Miller, a resident of Falls Church, spoke at the meeting against the way the current proposed RSU amendment is written.

"There’s no requirement and no thought in any of this language that any of this is regulated. It could have a halfway house in an R-12 residential district, unmanaged and unregulated. The County placed that in same pot with the notion that we need to do something for first-year school teachers, and they don’t belong in the same pot. They need to be separated," Miller said.

Pettit, however, believes that residential studio units can help a variety of people.

"These are designed for people from all kinds of backgrounds, not just coming from the area of my particular interest, those with disabilities, but also older people, younger people, those just starting out that want their own place rather than boarding with some other people," Pettit said.

Keith Bender, a Springfield resident, believes that more thought needs to be put into the amendment.

"It’s being crafted so it’s a beautiful example of what could have been, but nobody wants to step up and build it," said Bender.

The next Planning Commission Residential Studios Committee will be on Jan. 22 at 7 p.m. in Conference Rooms 2 and 3 at the Fairfax County Government Center.