The year 2013 provided several exciting moments in local sports. At Wakefield, Re'Quan Hopson picked a great time to make his first 3-pointer of the season. At Washington-Lee, the girls' cross country team had the best season in program history, the football team snapped a district-title drought of more than three decades and a group of gymnasts ended their high school careers with another strong performance.

Here is a look at the top moments in Arlington sports for 2013:

Wakefield’s Re’Quan Hopson, seen during the 2013 VHSL state tournament, made a game-winning 3-pointer against Langley in the Northern Region quarterfinals.

The Wakefield boys’ basketball team’s postseason run included a National District championship and a trip to Richmond for the state semifinals. The latter would not have been possible without the late-game heroics of Re’Quan Hopson.

Then a junior, Hopson buried a 3-pointer at the buzzer to give Wakefield a 46-44 victory over Langley on Feb. 19 in the quarterfinals of the Northern Region tournament. The Warriors would eventually reach the region championship game, earning them a berth in the state tournament.

Hopson wasn’t the first, or even the second, option to take the last-second shot. But that didn’t stop Hopson from knocking down what head coach Tony Bentley called “The Shot.” It was Hopson’s first 3-pointer of the season.

“‘The Shot’ was drawn up for Khory Moore, but when he was covered, the second option was for Ermias Nega,” Bentley wrote in an email. “He was also covered. Re'Quan passed the ball into Marqua Walton (a sophomore at the time), who wanted no part of the game-winner. He (Walton) passed the ball back to Hopson, and he calmly knocked down a 3-pointer as time ran out.”

The regional quarterfinal contest against Langley was Wakefield’s final home game in a gym that hosted its first game in 1953. Wakefield had a new gym built prior to the 2013-14 season.

“He closed the gym with that shot,” Bentley wrote. “Re'Quan Hopson will be [an answer to] trivia questions for life.”

The Washington-Lee girls’ cross country team finished state runner-up in Group 6A at the 2013 state meet.

In 2013, the Generals took their success to another level.

Washington-Lee produced the best finish in program history, placing second in Group 6A at the VHSL state cross country meet on Nov. 15 at Great Meadow. The Generals earned a berth in the state meet by finishing runner-up at the 6A North region meet.

“All the girls truly enjoyed the experience of the state championships,” W-L head coach Matt Przydzial wrote in an email. “We left school on Thursday morning, reviewed the course on Thursday afternoon, stayed overnight in a hotel, and woke up the next morning for the race. The girls ate meals together, traveled together and spent a lot of time together over the 24 hours, bonding as a team. The weekend really had a NCAA-type feel to it and I think the girls enjoyed being lucky enough to have this experience as a team.”

“We were able to earn second place at the state meet because we had seven girls whose goal was to accomplish this feat beginning in the end of June,” Przydzial wrote. “All seven of them were cross-training, doing Pilates, yoga, pool-running and really taking care of themselves. It really helped in workouts to have so many girls working hard together, working toward the same goal. They knew that small injuries and various ups and downs would occur throughout the season but all of them knew that the season wasn't over until after the state meet and always kept their sights set on the long-term goal.”

If winning the program’s first district championship in more than three decades wasn’t enough of a thrill, the Washington-Lee football team did so while beating its rival.

The Generals traveled to Yorktown on Nov. 8 and shut out the Patriots on their home field, 10-0. W-L finished the regular season with an 8-2 record and captured the National District title with a 7-0 district mark. It was Yorktown’s first regular-season district loss since 2009.

“[My] most fond memory was playing for the title against an in-county rival,” W-L head coach Josh Shapiro wrote in an email. “We were both 6-0 in the district, playing for all the marbles. We defeated a great team, directed by a legendary coach (Bruce Hanson), that had not lost a district game in four years.”

W-L squandered several scoring opportunities before finally getting on the board with a 20-yard Henry Casey field goal with 3:30 left in the third quarter. Senior quarterback Sam Appel scored on a 1-yard sneak with 11:44 left in the fourth quarter.

“We were able to accomplish our first district title in 38 years because of a team of committed players, who were unselfish, competitive, and hated to lose,” Shapiro wrote. “I was fortunate to have an excellent staff to work with.” 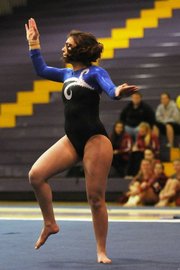 Mary Lynn Clark and the Washington-Lee gymnastics team repeated as state runner-up in 2013.

A talented senior class left its mark on the Washington-Lee gymnastics program, helping the Generals place second at the state meet for the second consecutive season.

W-L’s score of 147.2 during the team portion of the state meet on Feb. 15 at Centreville High School was the top score in program history. Kellam won the title with a score of 148.3.

“We had a dynasty,” W-L head coach Joe D’Emidio said after the individual portion of the state meet on Feb. 16, “for the last four years.”